Domtar Deal, Deforestation and Abuses: Whose Side are Banks On? 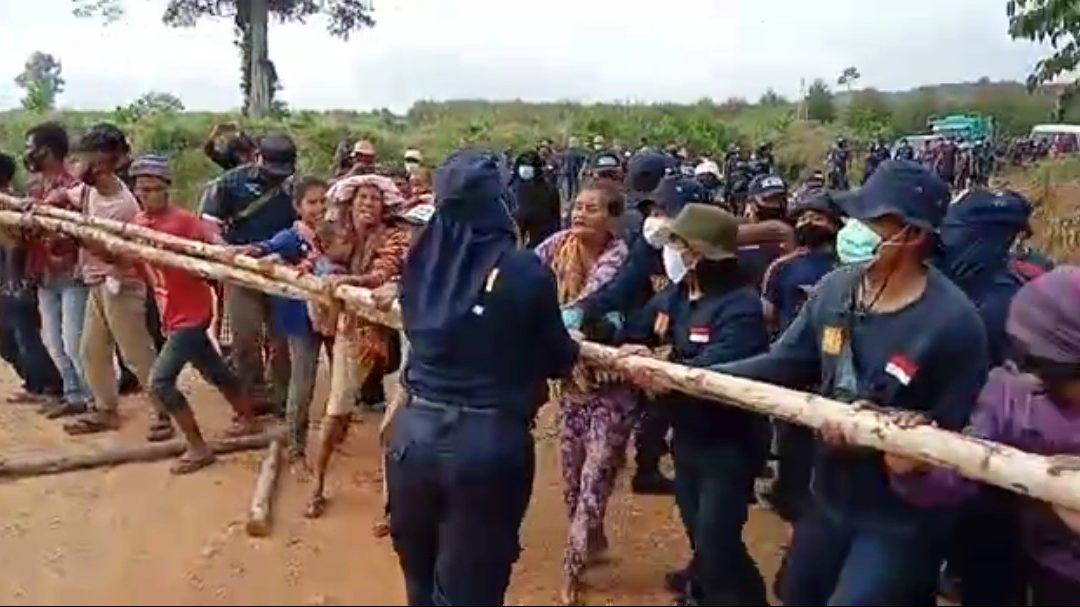 Last July, Andrea Paul received a letter containing a drawing of an Indigenous person and a Black person hanging from a tree. The caption said, “This is what I think of Natives and Blacks. You think you rule the world.”

Miss Paul is the traditional Chief of the First Nation of Pictou Landing, who just won a decade-long fight against the Northern Pulp paper mill in Pictou, Nova Scotia, Canada. For 50 years, the Pictou Landing First Nation community has lived uneasily near an industrial plant emitting brown, foul-smelling waste and an effluent treatment lagoon that spoiled culturally significant lands and caused respiratory and skin illnesses. Now the mill is closed, but it has been a bitter victory: forced by the government to clean the polluted bay, Northern Pulp declared insolvency last May. This way the company avoided the reimbursement of the USD 95 million public money loans, the last loan of USD 10m was handed over in May 2020 when the plant was already closed.

Even more outrageous is the fact that Northern Pulp recently informed the Nova Scotia government that the company intends to start legal proceedings to get “more than USD 100 million” from the province, which it claims represents the losses incurred because of the closure of the pulp mill in Pictou County.

At the same time, Northern Pulp’s parent company, Paper Excellence, is in the process of acquiring Domtar – one of the world’s largest producers of market pulp with more than 20 facilities in North America – for a hefty USD 3 billion. 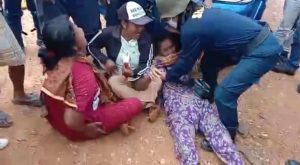 A few days earlier, on the other side of the world, in Sumatra, Indonesia, over 200 security personnel of the timber plantation company PT Arara Abadi assaulted a group of Indigenous Sakai women working in their plot. This is not the first episode of aggression, as back in 2008, the company security, with the support of army personnel, fire bombed their village, Suluk Bongkal, because villagers were opposing the plantation’s expansion in their traditional territory. 300 huts were reduced to ashes, and two children died. PT Arara Abadi is controlled and supplies fibre to paper giant Asia Pulp and Paper (APP).

In the past decades, while bulldozing pristine rainforests on a large scale, APP became embroiled in hundreds of social conflicts in Indonesia, and the indigenous people of Suluk Bongkal were constantly evicted from their traditional land, and jailed for trying to cultivate it.

In Jambi, another Indonesian province, a different APP controlled timber plantation company, PT. Wira Karya Sakti (WKS) reinforced the evidence of APP’s disregard for human rights, as two farm workers were detained by police for working on long-standing disputed land ahead of the conflict resolution process. This is the same company that last year sent drones to destroy community gardens. The same criminalization strategy has been widely used by other plantation companies associated with APP.

What do these stories have in common? All subsidiaries responsible for abuses of local communities are part of the same conglomerate, owned by a single family. APP oversees a large number of plantation companies in Indonesia (partially via its conglomerate Sinar Mas), and also controls the Northern Pulp paper mill in Nova Scotia via Paper Excellence, a group managing mills in Canada and France. Although a complex corporate structure obfuscates the connection between Paper Excellence and APP, strong evidence indicates the two groups operate as a deeply integrated production-marketing conglomerate. 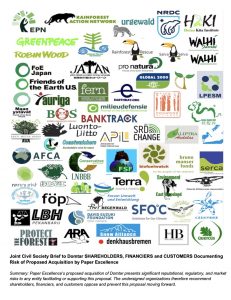 And despite its 2013 promises to restore the forests and to resolve social conflicts, the two stories show that APP failed on both of these commitments.

This is why 64 social and environmental organizations worldwide urged financiers, investors and customers of Domtar to reject the USD 2.8 billion Paper Excellence Deal, stressing social and environmental concerns. Groups have also shared concerns and information with the three main financial groups funding the acquisition – Barclays, Credit Suisse and Bank of Montreal (BMO) – which committed a total of USD 1.95 billion to the project, together with some of their affiliates.

Paper Excellence and APP/SMG are inevitably linked, and so are their severe social and environmental impacts. A recent analysis by NRDC of Domtar’s public policy regarding Indigenous Peoples and sourcing from primary forests provides additional evidence of the reality of the company’s business on the ground. So it is surprising that banks such as Barclays and Credit Suisse are supporting the deal.

It is surprising because these two banks even have specific public policies on the matter, which state that “we require all forestry companies to: (…) prohibit the conversion or degradation of primary forests, High Conservation Value or High Carbon Stock areas and peatland.” (Barclays), and “will not finance or advise Forestry and Agribusiness Companies against which there is credible evidence of involvement in grave human rights abuses such as, e.g., forced labour, employment of children, or the use of violence against local communities and indigenous groups.” (Credit Suisse).

However, given the recent support given to companies with documented records of forest destruction and abuse of local communities, it is difficult to understand how banks intend to implement their policies in practice.

Which is why, as a global network, we are calling on Barclays, Credit Suisse and BMO to carefully read the EPN’s Green Paper, Red Lines (minimum standards for financing pulp & paper companies) and bring the banks’ policies in line with the standards required, while fully implementing the banks’ existing policies.

The Domtar deal is very disappointing and harmful. It indicates that banks’ policies are still extremely ineffective in guaranteeing that the industry respects environmental and social standards, even bare minimum ones. This is the opportunity for banks to seriously review their policies and practices, and make sure they are worth the paper they are printed on.

For more information about the severe environmental and social impacts of APP, SMG and Paper Excellence, please see our background briefing here.