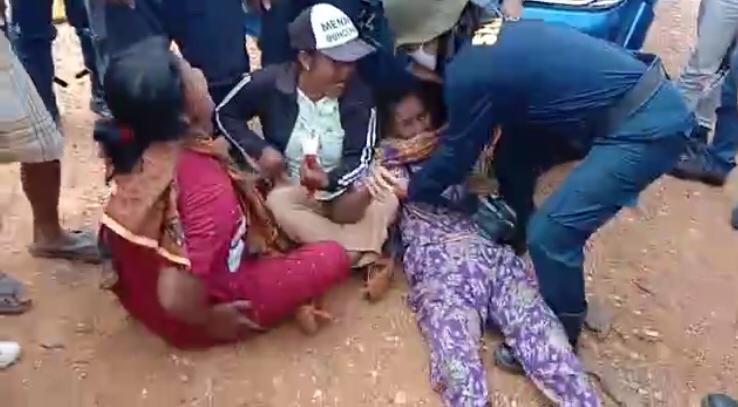 What started as a normal, quiet day in the country village of Suluk Bongkal (in Sumatra), turned into a horrific afternoon and evening. On December 18th 2008, a small army of policemen, private security and paramilitary groups attacked the village, and suddenly, all hell broke loose: tear gas grenades exploding in grey puffs, women screaming, children crying.

A local ruler had given the village and its gardens to the powerful plantation company PT Arara Abadi, which is controlled and supplies fibre to the paper giant, Asia Pulp and Paper (APP). Nobody cared enough to check whether this land was already traditionally owned by local communities. The company just took the land and started to bulldoze intact rainforests and peoples’ gardens alike. It is a case that tragically demonstrates how APP became embroiled in hundreds of social conflicts all over Indonesia.

Villagers in Suluk Bongkal have been trying to establish their right to 2,900 hectares of land since 1997. But even with written proof of their tenure rights dating back to 1940, the authorities and APP still do not acknowledge, let alone respect, their land rights. On different occasions, villagers have come to an agreement with Arara Abadi, but every time the company has violated the agreements. Unlike many other social conflicts in APP tenure that are still unresolved at all, in the case of Suluk Bongkal, the case was resolved with extreme measures: removing an entire hamlet.

The 2008 action however was not over yet: police helicopters flew circling over the huts like vultures, and, and suddenly they caught fire. 300 homes burned to the ground. Chaos erupted as the villagers started to run to escape the blaze. A two-year-old child fell into a well, and died. Fifty-eight people were arrested by the police. 400 villagers remained homeless, living in a nearby forest.

Even when five years later APP released its Forest Conservation Policy, which included a commitment to respect communities’ rights and to resolve social conflicts, the villagers of Suluk Bongkal found no justice, as nobody cared to investigate the human rights violations that PT Arara Abadi caused there. It was a forgotten story. But not for the local people, however, as they still struggled to defend their traditional lands.

Apparently, despite the commitment to respect indigenous peoples’ rights, Arara Abadi security kept its old habits of burning villagers’ huts: according to local villagers, in 2017, a member of the Sakai tribe living in the land claimed by the Arara Abadi, was brutally forced out of his house and injured. Company personnel tried to burn down his house and finally demolished it.

Another horrific habit that Arara Abadi apparently kept is to have traditional land owners jailed: about a year ago, in Suluk Bongkal, the security team of Arara Abadi arrested Pak Bongku, a member of the Sakai indigenous people, for cutting 20 plants of Acacia and eucalyptus in his ancestral land and planting sweet cassava. To enforce the company’s claim to the land, the security handed Mr. Bongku to the police and with the allegation of illegal logging. He was subsequently condemned to one year in prison and ordered to pay 200 million rupiah ($13,800), the equivalent of almost 10 years minimum wage.

And now – last month – yet again Arara Abadi has unleashed violence to grab Indigenous land. On Tuesday, 27 April 2021, around 30 Sakai people in Suluk Bongkal, mostly mothers with their kids, were tending their gardens, when more than 200 security personnel of Arara Abadi broke into the area to expel the villagers and plant eucalyptus. The Sakay used just 10 hectares which included gardens and ancestral graves. 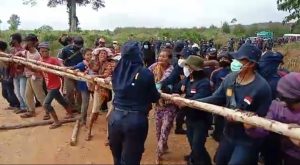 The Sakai community women tried to stop the security. As a result, several villagers were injured, including an old woman who was brutally lifted and thrown in a ditch. The brutality also had a severe psychological impact on the Sakai children, who now run away in fear as soon as they see personnel in security uniforms.

These old and very recent stories of Suluk Bongkal are yet another warning about the poor performance by APP in implementing its own commitments.

A coalition of Indonesian civil society organisations, the Coalition for People (CoPF), together with the Sakai tribe, wrote a letter to APP buyers and financiers to urge them to to suspend any business with APP and associates. This call is even more important in light of the announced take-over of Domtar, the largest integrated producer of uncoated free-sheet paper in North America, by an APP sister company, Paper Excellence.

Domtar investors, such as Blackrock and Vanguard, must look carefully at their own values and policies and scrutinise the human rights and environmental risks of bringing the North American pulp and paper industry into the control of a conglomerate that is notorious for cases like the incidents described above.

Find here the letter written by the Coalition for People: https://environmentalpaper.org/wp-content/uploads/2021/06/20210515-Arara-Abadi.pdf