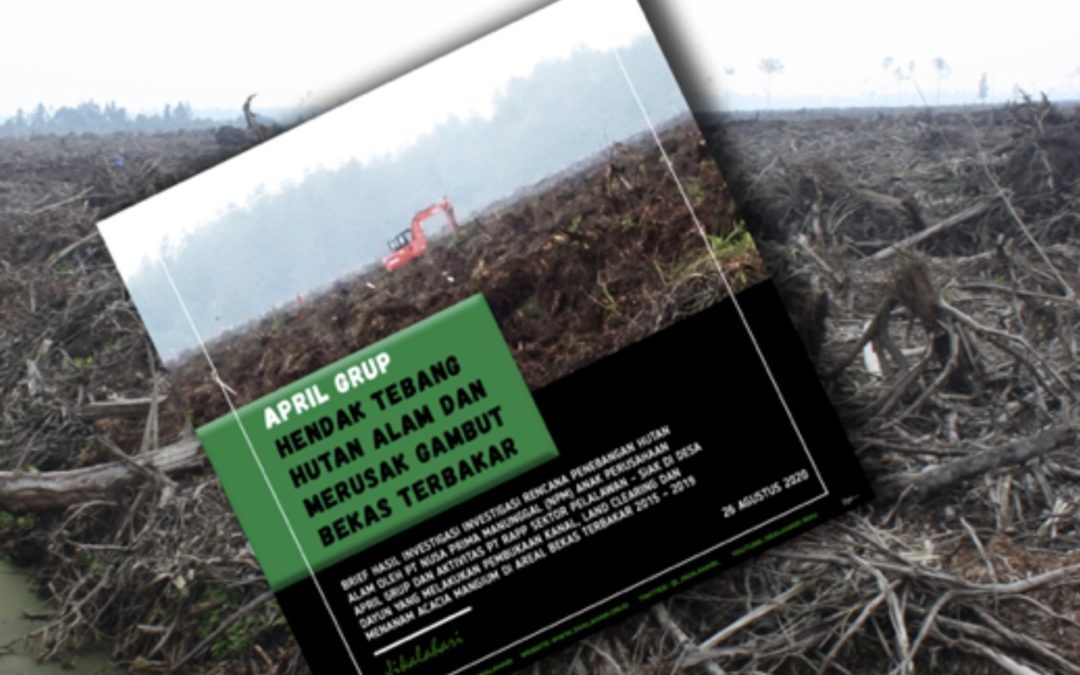 Asia Pacific Resources International Holdings Limited (APRIL) is Indonesia’s second largest pulp and paper producer, and one of the world’s largest producers of rayon, a textile widely used by the fashion industry. After a decade of business expansion at the cost of Indonesian rainforests and of increasing boycott campaigns, in 2015, APRIL committed to stop deforestation, to protect natural forests and peatlands, and to respect local communities’ rights. Up until now, however, APRIL has failed to keep its promises and properly implement its Sustainable Forest Management Policy 2.0.

When the people of Pulau Padang Village, (Singingi District, Riau Province, in the island of Sumatra) learned about the formation of a new forestry cooperative, they were not happy. The Koto Intuok Cooperative, they discovered, arrived in their community forests with heavy machinery, and with a plan to log it and convert it into a pulp-wood plantation.

The community believes that order to expand the access to land beyond its own concessions, APRIL allegedly resorted to setting up a ‘cooperative’ to access community land and illegally clear peat swamp forests, and that there is a connection between the cooperative management and the forestry company PT Nusa Prima Manunggal (NPM). This company is a subsidiary and wood supplier of APRIL.

Informed of the facts, the local NGO forest network, Jikalahari, sent an investigation team. What the team discovered and reported in the areas is much more: a number of different operations, all beyond the limit of legality, all aimed to clear-cut natural rainforests and threatening the peat-based ecosystem, an activity clearly excluded by APRIL’s commitment.

Indonesian regulations currently secure a certain amount of forest for community use. In 2017, the “community cooperative” Koto Intuok Cooperative submitted a request for a permit of community forest management to operate in near the Pulau Padang Village, located in south-west of Riau, Sumatra.The request included a plan to clear-cut natural forest on peatland – an activity which, some time after the submission, became illegal in the targeted areas. Despite this, in 2018 the “cooperative” was granted 1,565 hectares of land. Jikalahari found that the land cover of the area at the time of the project’s submission to the Government consisted of 91% forest, 8% shrubs and 1% open land (respectively 1,422 ha of forest, 121 ha of shrubs and 22 ha of open land). The exploitation hasn’t started yet, but if it goes ahead, the activity would also affect the ecosystem of the Bukit Rimbang Bukit Baling Wildlife Sanctuary.

In recent years worries have grown about pulp plantation companies organising ‘community forests’ projects under the heading of ‘community cooperative,’ but that the companies actually manage for their own benefit and access to fiber. The companies take on managing bureaucratic matters, providing logistics management, technical personnel, heavy machinery etc) and gain access to forest land that they have no rights to. This practice would not only circumvent the law, but would also create conflicts within the communities, or inter-community conflicts between the villagers involved as figureheads and the rest of the community. If the involvement of an APRIL-controlled plantation company in the case of the Koto Intuok Cooperative is confirmed, this would reinforce concerns about  the development of a new deforestation scheme of dubious legality.

According to the Jukalahari investigation, APRIL’s subsidiary PT Riau Andalan Pulp and Paper (PT RAPP) is clearing an area of swamp-forest on thick peat (depth of more than 3 metres) on areas customarily belonging to local communities. The company cleared both ​community-owned oil palm plantations and young forest stands, over an area of 675 ha.

Despite the cleared forest being relatively young, it is a dense natural forest with trees over 50 meters tall and very tight. In the area, the Jikalahari investigation team found traces of tigers, bears and pigs, indicating that the forest is a habitat for wildlife.

According to the local community, the clearing operations started in May 2020. The investigative Jikalahari team found that they are still ongoing, with part of the area already planted with acacia.

The team also noted the presence of heavy equipment still operating to clear the deep peat.

An analysis of the areas planted with acacia by PT RAPP compared with the satellite maps of fires (NASA’s Terra Aqua Modis Satellite) reveal that these areas had been burned during the seasons of 2015-2017. The associated area is classified as a red zone for Peat Agency (BRG) work priority which means those areas need to be restored either naturally or by human intervention. Satellite images of field findings revealed that PT RAPP is violating Indonesian regulations by planting acacia inside the red priority zone identified by the national peat restoration agency.

In addition to constructing new canals on peatlands, PT RAPP has also dredged and widened old canals. In order to drain the recently cleared areas, PT RAPP dug a new canal in areas where the peat is thicker than 3 metres, once again in violation of Indonesian regulations. The canal is 3 metres deep and 6 metres wide.

A large number of buyers and investors have taken APRIL’s commitments seriously. They should also take seriously the facts showing that these commitments have not been implemented, and that business with APRIL and its sister companies (such as Sateri, Toba Pulp Lestari and Asia Pacific Rayon) represent a serious reputational threat.

Please note: On October 6th Eyes on the Forests  released the results of a further investigation on the case.  Among other elements, the investigation reinforced the villagers’ suspect that PT NPM used the Koto Intuok Cooperative to exploit a community forestry scheme: “They asked us to fulfil any administrative requirements, then we handed it over to them [NPM]. Until the HKm license is released,” said Jon Herman, the chairman of the Cooperative, explained that the Cooperative was fully supported by NPM to propose the forest to the Ministry. The transportation to the Ministry (in Jakarta) was also supported by PT NPM. See: Eyes on the Forestsinvestigation.