San Francisco, CA –  New research conducted by a coalition of Indonesian organisations and the Environmental Paper Network has found that the second-largest Indonesian paper company Asia Pacific Resources International Limited (APRIL) is involved in hundreds of conflicts with communities across the Indonesian islands of Sumatra and Borneo. Conflict Plantations: Chapter 2 delivers research results showing that in just five provinces of Indonesia, at least 101 villages or communities are in active conflict with affiliates of APRIL, or its suppliers, while more than 500 villages may have been impacted by their forestry operations. 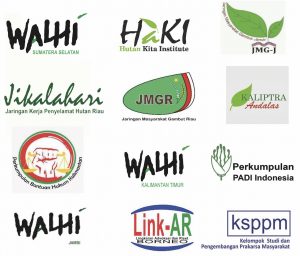 The report released today adds to the analysis already published in Conflict Plantations: Chapter 1, which focused on social conflicts within and around the concessions of wood suppliers to Asia Pulp & Paper (APP). Together, APRIL and APP control approximately 80 percent of Indonesian pulp production capacity. The two chapters combined present a striking picture of the social impacts of the pulp and paper industry in Indonesia and the need for greater transparency and resolution of the conflicts.

APRIL has a long legacy of deforestation and other negative environmental impacts. Between 2008 and 2011 APRIL’s suppliers cleared at least 140,000 hectares of natural forest. More than a quarter of all forests in Sumatra’s Riau Province have been cleared to provide wood for APRIL mills. This massive forest conversion has also massively affected indigenous peoples and other local communities. Communities that rely on cultivating rubber, sago and other crops within the forest landscape have borne the impacts of APRIL’s activities over the last decade, including on Riau’s Kampar Peninsula and the coastal islands, causing some residents to resort to such drastic protest measures as sewing their mouths shut.

Furthermore, APRIL’s suppliers’ and affiliates’ social conflicts should alarm the global fashion industry. APRIL’s conglomerate, Royal Golden Eagle (RGE) uses large amounts of wood-fibre to supply viscose for textiles used by the fashion industry. APRIL’s sister company Sateri is one of the largest producers of the synthetic textile rayon, and its products are said to be found in the supply chain of brands such as Esprit, Zara and Marks & Spencer, along with many other brands that are less transparent.

Viscose is produced from wood-fibre, and Sateri used to source from Toba Pulp Lestari (another company controlled by APRIL’s owner, the Tanoto family) that is involved in dozens of social conflicts with indigenous people in North Sumatra. The indigenous communities claim that Toba Pulp Lestari stole ancestral land to expand its eucalyptus plantations. APRIL now supplies Sateri and its sister company Asia Pacific Rayon (APR), which has two viscose staple fibre production lines at APRIL’s Kerinci mill in Riau Province.

“As APRIL is getting bigger, there is no doubt it will increase the impact not only to peatlands, but also on local communities,” said Rudiansyah, Executive Director of the Indonesia environmental group WALHI’s regional chapter in Jambi. “The findings of this research show APRIL’s failure to maintain its sustainability commitments. The company’s recent claim to have no major social or community disputes also demonstrated this failure.  If APRIL is serious about its commitments, it should be fully transparent, involve key stakeholders, resolve all conflicts in a participatory way. This should start with priority conflicts, must involve APRIL radically improving its business practices.”

Rudiansyah addd, “However, it seems APRIL’s sustainability and conflict resolution promises remains mere greenwash, as no significant changes are happening on the ground.”

“This is critical information for socially and environmentally responsible companies around the world that are purchasing pulp, paper and textile fiber, “said Sergio Baffoni of the Environmental Paper Network. “Our partners have made a thoroughly researched case for global brands and potential customers to demand more transparency by APP and APRIL and the resolution of conflicts for communities in Indonesia caused by conflict plantations. “Results of the independent research by Indonesian civil society groups in Conflict Plantations, Chapter 2 shows that APRIL is far from implementing its own commitments to resolve social conflicts.