The end of the misguided Amazar pulp mill project? 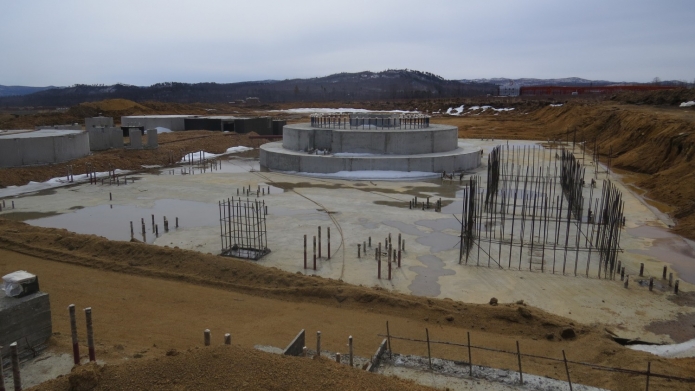 Kiu Hung International Holdings Limited has announced the decision of its Board of Directors that it will not proceed with the project.

Of the many pulp and paper capacity expansions around the world, few were are as misguided and as threatening to native and intact forests as the Amazar Pulp and Saw Mill (APSM, also known as Polaris or CPK Poyarnaya) in Siberia at the Russian border with China. The APSM was connected with risks from large scale logging of native forests, and the opening of the region to accelerated resource extraction with the building of a bridge on the border. Over several recent years, the developers of the project provided incomplete or misleading information. This lack of transparency, and information that was then provided by civil society, ultimately led to major investor news for the project this week that could mean the pulp mill project’s demise, and an opportunity for more sustainable economic development in the province.

The APSM is still under construction but is already one of the best known risky and conflict-prone forest industry investments within Russia by Chinese entities. Some infrastructure and limited sawmill operations have been built in years past. It has been accused of violating indigenous peoples rights, of threatening unique biodiversity-rich forests along the border, mistreating and discriminating local workers, and the illegal construction of a large dam that blocks migration of rare fish species.

The business proposal for the APSM was to build in Zabaikalsky province, 87 kilometres from the Chinese border. It consists of a pulp mill, two wood processing facilities, a reservoir on the Amazar River and an extensive logging concession. APSM has been granted a lease for 218,234 hectares of primeval forest along the transboundary Argun (Eerguna) River. Half of this forest area lies in traditional areas of indigenous Evenke, and some of in areas previously reserved for the creation of nature reserves. Even if this biodiversity rich forest is cut, it could only satisfy 15-20% of the project’s needs.

APSM needs to clear cut forests to obtain at least 2.1 million cubic meters of wood per year, to annually produce the necessary pulp and lumber. However, a study by Greenpeace Russia showed that current forest resources in a 250 kilometer radius will be hardly enough for 10 years of APSM’s operation. The problem with wood supply was officially acknowledged by the company and Russian Presidential Council on Human Rights in April 2016. The Siberian forest has been already affected by logging to supply the expanding flooring and furniture industry in China, and also threatened by climate change effects such as massive fires. Being a slow-growing forest, any poorly planned industrial development risks to cause permanent damage on a vast scale.

The project was first conceived in 2003 and supposed to open in 2007. But for many reasons in a complicated history, including a closed border crossing, and shifting ownership, the project to build the pulp mill never moved forward. But the government agreements to enable it remain, and efforts have persisted to build the mill. In 2010, APSM secured a loan of 2.4 billion yuan (US$ 370 million) from the China Development Bank and less than one billion yuan (US$ 160 million) raised from other sources. As projected construction costs have doubled, new attempts to raise funds have repeatedly been made to complete the deal.

Many Chinese businesses are looking to diversify their activities by purchasing assets along “Belt and Road” routes.  One of these companies is sewing-machine manufacturer Zoje (ZJR), which is listed on the Shenzhen Stock Exchange. Zoje attempted to raise funds from shareholders for construction of the mill. In its long disclosure statement, Zoje did not articulate specific environmental and social risks, or present evidence of sufficient forest resource to sustain production. It is important to note that companies must follow China’s “Guidance on Promoting Green Belt and Road,“ which requires projects to ensure that overseas projects do not exceed the carrying capacity and resilience of local ecosystems.

In May 2017, Environmental Paper Network (EPN), and eight Russian and international non-governmental organisations petitioned the Shenzhen Stock Exchange and China Securities Regulatory Commission to investigate. In early 2018, the application was withdrawn by Zoje after failing to receive regulatory clearance.

But that was not the end of the story.

In March 2019, Hong Kong Stock Exchange listed firm Kiu Hung International Holdings Limited announced an intention to buy a major stake in the project. This time, the NGOs notified the Hong Kong Stock Exchange about the fact that Kiu Hung had failed to disclose a series of risks related to the project in its September 2019 disclosures, thus misleading its shareholders. Responding, the company issued a new disclosure of risks associated with the investment in November 2019, which included the statement, “….therefore Polaris could suffer from insufficient forest resources for its planned operations and affect the Project’s profitability.”

This week, as a result of these events, Kiu Hung announced the decision of its Board of Directors that it will not proceed with the project. The Voluntary Announcement states, “The Company hereby announces that in light of the potential risks in relation to the Project as disclosed in the announcement of the Company dated 4 November 2019, the Board has decided not to proceed with the Project and to terminate the Operation and Management Contract with Polaris.”

Though the pulp mill project was cancelled by Kiu Hung, the Government of Zabaikalsky Province has not yet annulled the forest lease agreements that were allocated to the project. However, according to Russian law, this should have been done by May 2019. Therefore, the Prosecutor’s Office may force the authorities to do so.

For more information on the Amazar pulp project, please see the profile available at the BankTrack website.