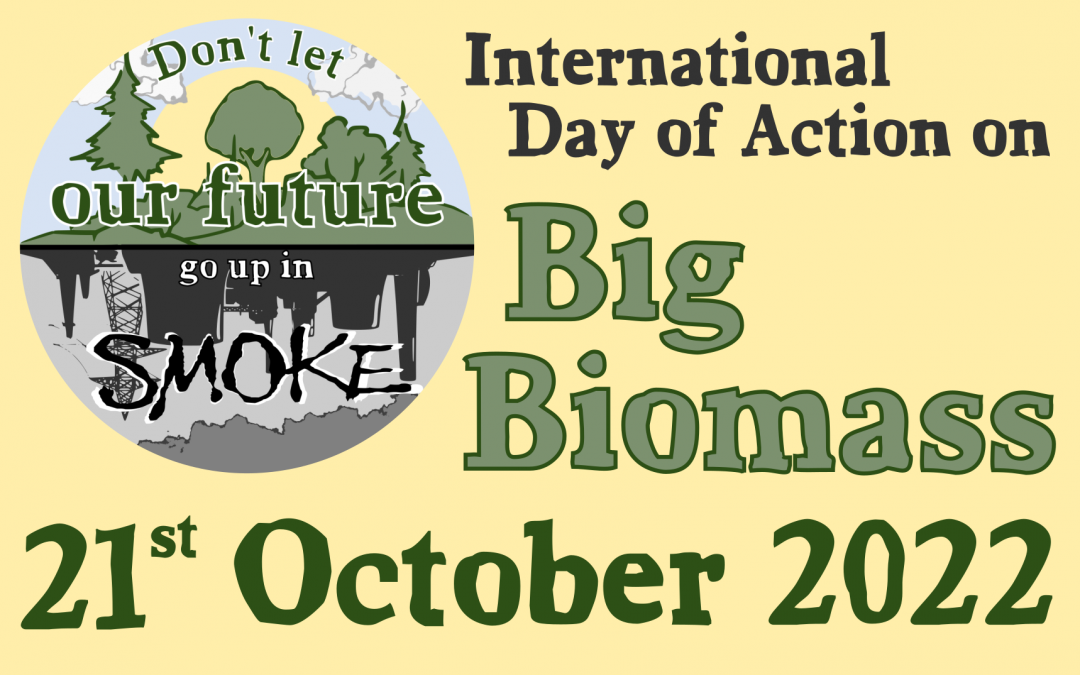 On 21st of October 2022, EPN’s Forest, Climate and Biomass Working Group coordinated an international day of action to expose the environmental and social impacts of big biomass globally. The day was a collaborative effort between groups all around the world, who took part by holding webinars, organising protests, doing banner drops, publishing reports, handing in petitions, and more. Below is a summary of some of the exciting things that happened during the “wave” of events around the world over 24 hours. 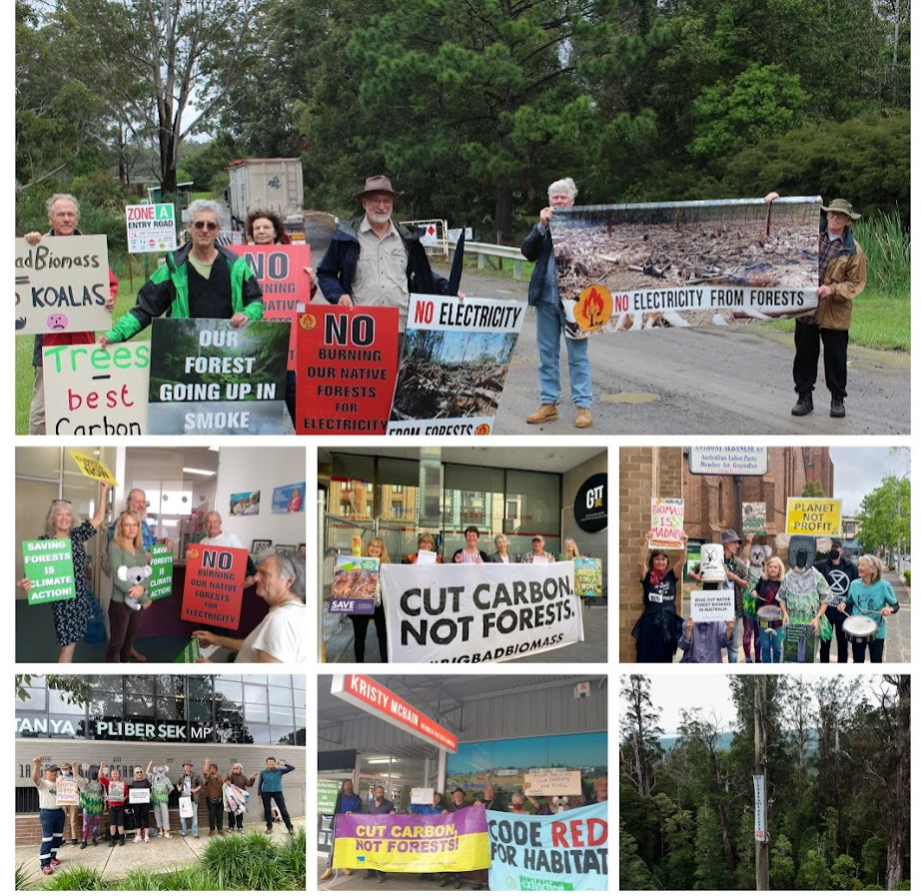 Australia got the day off to a flying start with protests outside the offices of the Prime Minister and the Environment Minister in Sydney, as well as protests outside local MP’s offices, a biomass power station, and a saw mill, in New South Wales. In Tasmania, protests took place outside senators’ offices in Hobart and Launceston and a huge banner was dropped by climbers from a tree in an ancient forest threatened by logging.

Jenny Weber from the Bob Brown Foundation said, “Australia’s Labor Government is currently considering excluding native forest biomass from eligibility under our Renewable Energy Act. Failing to remove it would be a climate and biodiversity crime. Australia’s native forests, left standing, are one of the strongest tools in sequestering carbon and must be protected.” Read more about the events which took place in Australia here, here and here. 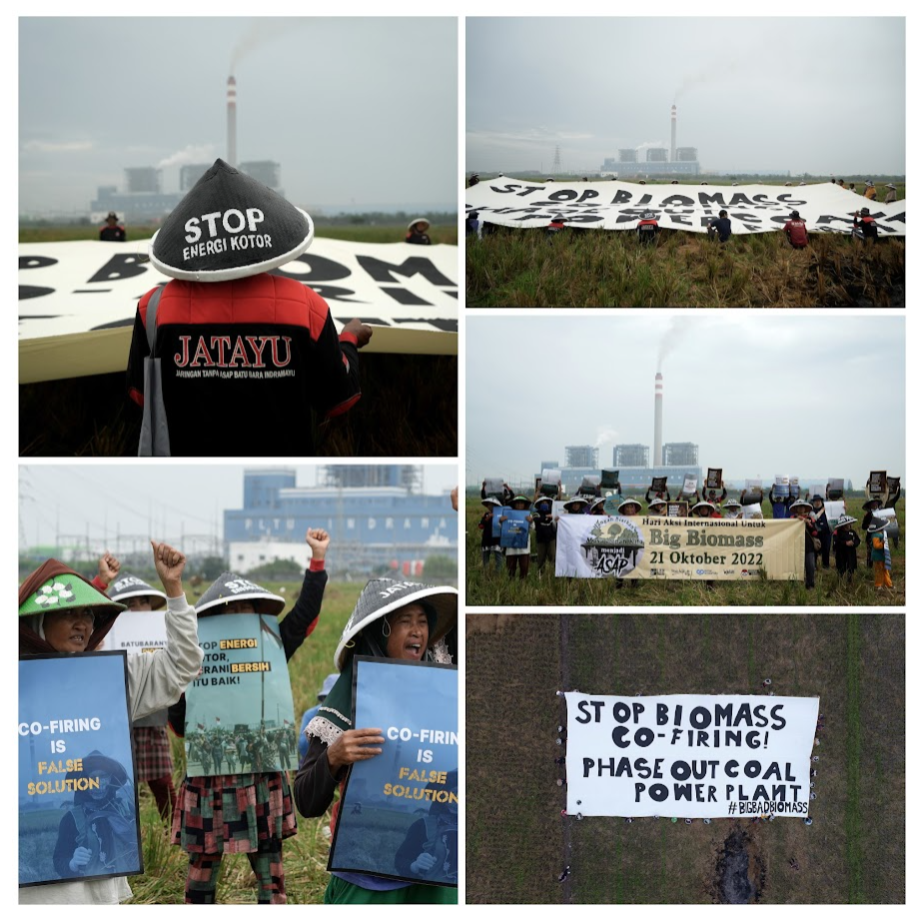 In Indonesia community groups held a demonstration in front of a coal fired power station in West Java that has been co-firing with biomass since the end of 2021. Throughout the existence of this power station, residents around the location have experienced significant impacts such as health problems and loss of livelihoods. Co-firing with biomass has only extended the life of this big polluter.

Meike Inda Erlina, a campaigner for Trend Asia said, “Co-firing policy favours the coal oligarchy rather than listening to the concerns of the affected people or taking the threat of climate change seriously. Co-firing shifts our focus from effective clean energy solutions.” The protest was covered by local media and you can read more on the Trend Asia website here. Trend Asia also published an investigation into co-firing, “Battle over emissions reductions claims”, in English to mark the IDoA. 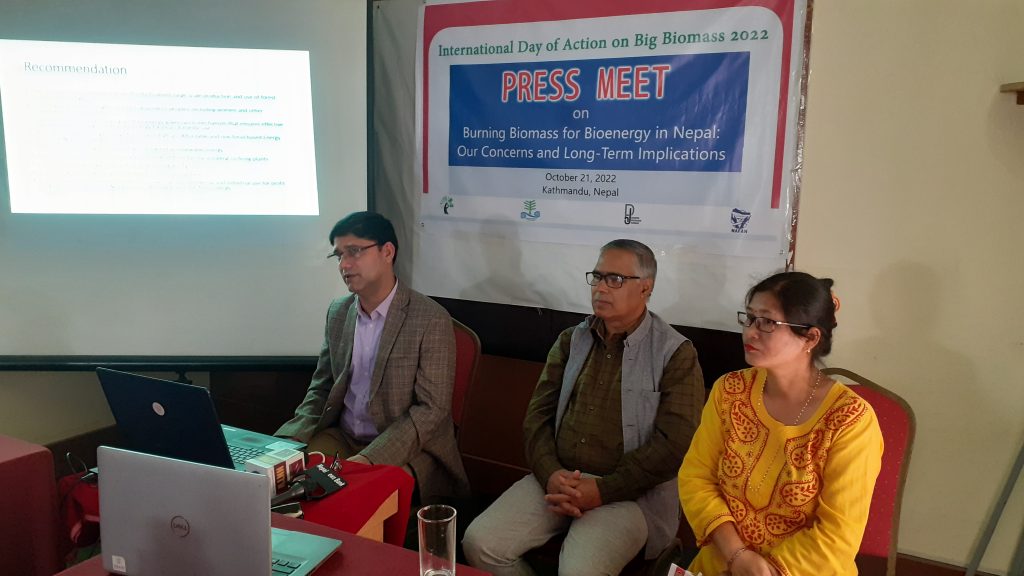 NAFAN, in collaboration with GFC & EPN, released a new briefing “The Industrialisation of forest-based bioenergy and its impacts on women and other forest dependent peoples.” They presented the main findings at a press conference (watch here) and Bhola Bhattarai from NAFAN said, “Many indigenous and local communities are dependent on forests in Nepal. Around 44% of our forests are community managed forests. In this context, the Nepal government should stop providing licences for industrialised, large-scale production and use of forest biomass for energy.” These issues were reported on in several publications: 1, 2, 3, 4, 5.

Friends of the Earth Japan & Global Environmental Forum hosted a very successful webinar on biomass, which was attended by 126 people. Panelists included 350 New ENEration, Kiko Network, HUTAN Group, A SEED JAPAN, 350.org Japan, and Fridays For Future Sendai, and was supported by a further nine groups for public relations. The webinar was a great opportunity for Japanese civil society groups to get together and build bridges for future work. Above is a screenshot of the panelists, which they submitted for the IDoA photo challenge! Watch a recording of the webinar here. 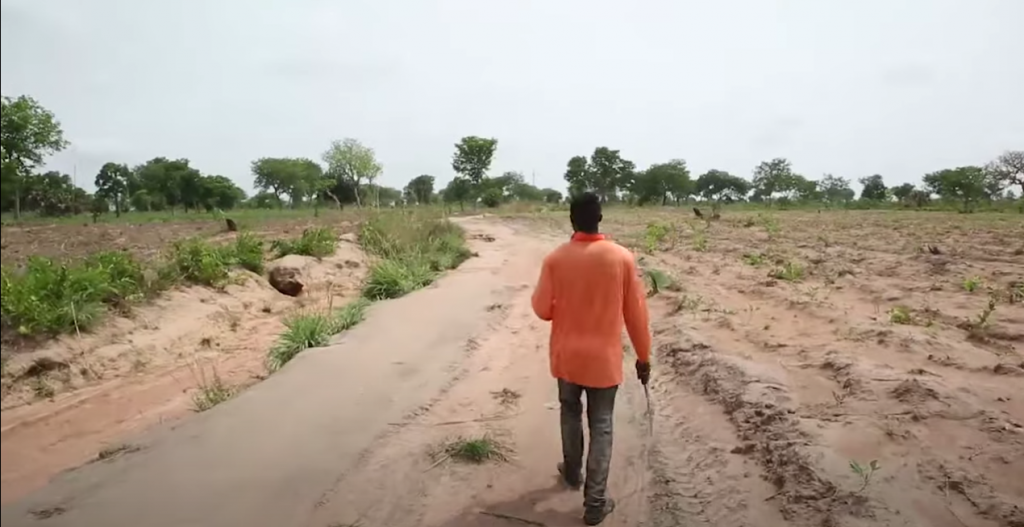 The Africa Biomass Group held a webinar (available in EN & SP) to discuss unjust carbon accounting rules which allow responsibility for carbon emissions from biomass to fall on producing, rather than consuming, countries. It included the screening of a new documentary by Civic Response, “The Impact of APSD Plantations on Communities in Atebubu” (pictured above). The documentary explores the impacts that plantations, established for a biomass power plant, are having on a local community in the Bono East Region of Ghana. Watch it here. 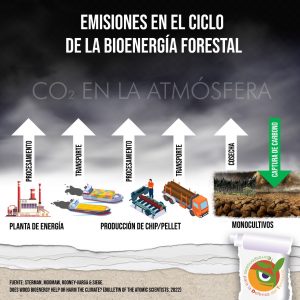 Chile Sustentable and Biofulewatch released the briefing “Decarbonisation in Chile – From Coal to Biomass: A False Solution” which questions the coal to biomass power plant conversion project of French company ENGIE. It will use about 4,800 tons of pellets daily and cause multiple impacts on the ecosystem and on people’s health. The briefing received some press coverage in Chile. Also on the IDoA, Colectivo Viento Sur released a series of biomass info-graphics (pictured).

The Cut Carbon Not Forest coalition went to Number 10 Downing Street (the residence of the Prime Minister) to hand in a petition signed by 44,000 people calling on the UK government to “Say No to Burning Trees for Energy”. At the same time, an AdVan with AxeDrax messaging on it made its way around London to raise awareness of the fact that the UK Govt has handed £11bn in biomass subsidies over the past 15 years to Drax, the UK’s largest carbon emitter. Protests also took place in York & Liverpool, organised by the Stop Burning Trees coalition, calling on Barclays to Drop Drax. Another protest organised by Thanet Green Party members took place in Kent outside Discovery Park Biomass Plant. Press coverage here and here.

In Berlin, Robin Wood, NABU and Deutsche Umwelthilfe organised a protest in front of the Federal Ministry of Economics, taking with them a six meter high inflatable tree with a chimney instead of a crown! They also handed in a petition signed by over 35,000 people against burning forests to Stefan Wenzel, Secretary of State for the Ministry of Economic Affairs. See here and here for more pictures and press release.

Local residents organised a banner protest at a biomass power station in Fundão to raise awareness of the impacts on their health. Fernanda Andrade who lives nearby said, “This biomass power plant and its chipping facility, built a few metres from our homes, is our slow death sentence.” The protest was supported by NGOs ZERO, Acréscimo and EPN and received some media coverage here. A banner action also took place outside the HQ of the Portuguese National Institute for Nature and Forests.

NGO NOAH was active online on the 21st, but saved their action for October 25th, when they announced the winner of the “Burning Wood Award 2022” in front of the Marriott Hotel in Copenhagen where the Biomass Industry held the Argus Biomass Nordics & Baltics Conference. This years winner was the Danish company CM Biomass. See press release. 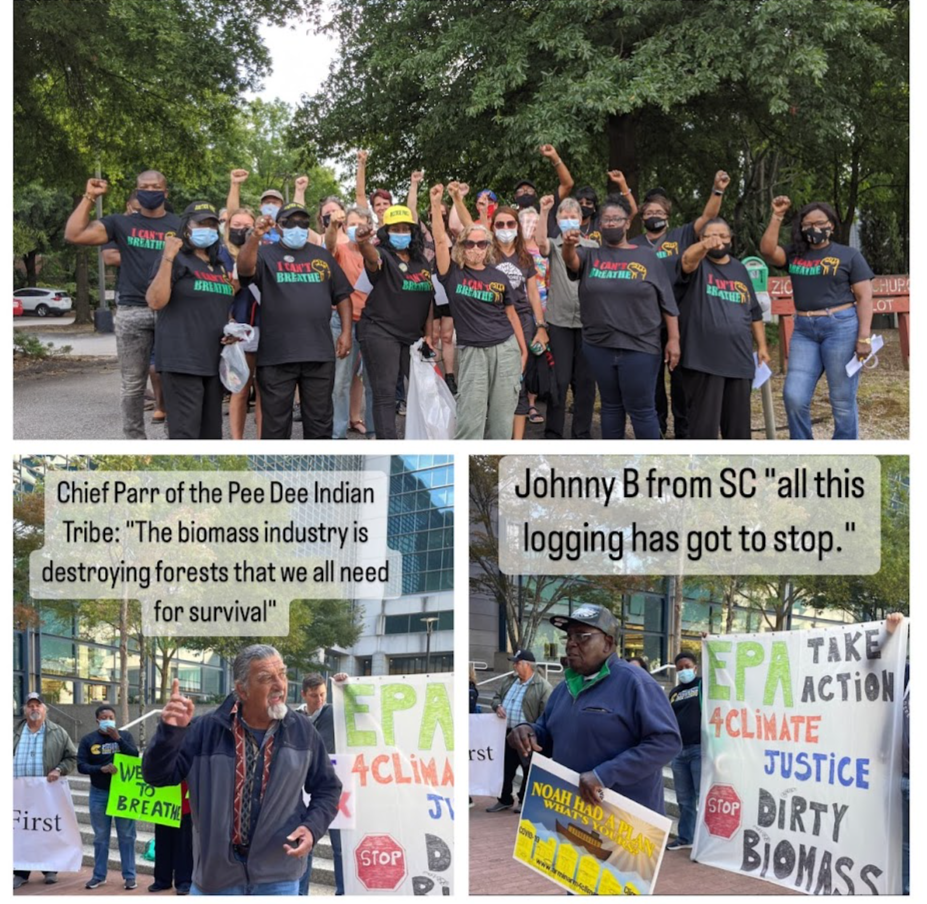 Community members, environmental justice leaders and activists gathered at Environmental Protection Agency (EPA) Headquarters in Atlanta where they held a press event in response to the unchecked and rapid expansion of the wood pellet industry in the Southern United States. They highlighted the fact that the biomass industry disproportionately impacts low income communities of colour across the region and called for federal oversight of the biomass industry. So far the EPA has failed to acknowledge or address the environmental justice concerns associated with the industry. Read the full press release from Dogwood Alliance here. The event was covered in the press here.

BankTrack published a new briefing: “Burning forests in the name of clean energy? How banks are failing to exclude the harmful wood biomass industry from finance” and held the webinar “Pressurising the financiers of the wood biomass industry” in collaboration with Biofuelwatch & EPN. This webinar is available to watch in English, French and Spanish.

All versions of the video “Burned – Are trees the new coal?” have been made available for free to celebrate the IDoA. Click here to watch and organise a screening! 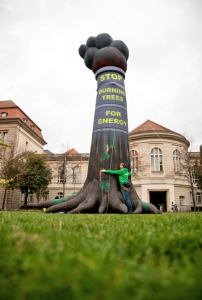 And That’s A Wrap!

Thank you so much to everyone who took part and helped to make this day a success!

To view more from the day, search the hashtag #BigBadBiomass on Twitter.

Did we miss something? If we missed an action, photo, or media link from this round up, please let us know by contacting sophie(at)environmentalpaper.org