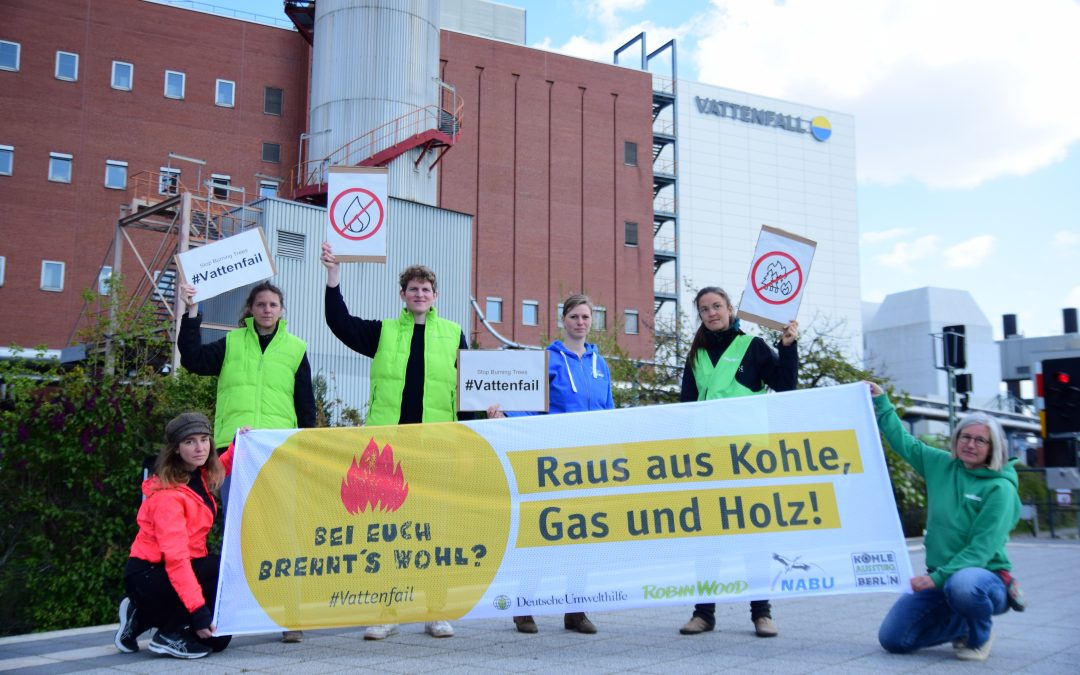 27th April 2022 – Today, ahead of tomorrow’s Vattenfall AGM, banner protests against the company’s investment in and expansion of wood bioenergy are being held at the site of a proposed new biomass plant in Diemen, Netherlands, outside Moabit power and heat plant in Berlin, which is running on coal and biomass, and outside the Argus Biomass Conference in London at which a Vattenfall representative is speaking. Campaigners are calling on Vattenfall to immediately cancel its plans for new wood bioenergy capacity, to abandon its wood pellet and woodchip trading activities and to rapidly phase out all of its coal, gas, biomass and waste burning and replace it with non-emissive renewable energy and investments in energy conservation.

At the same time, climate and forest campaigners around the world have been tweeting #Vattenfail images in support of these protests at Vattenfall.

In Diemen, activists under the flag of Comite Schone Lucht are occupying the bridge for Vattenfall with yellow tapes with the text: “Crime Scene, do not enter”, with a 10 metre long banner saying: “Forests burn to save the Climate? WTF!” Fenna Swart of the Clean Air Committee said: “Last Friday, the Dutch cabinet decided to stop all new biomass subsidies immediately. Vattenfall has always referred to politics in critical questions. Now that it has spoken so explicitly, Vattenfall should keep its word. It’s clear: there is no longer any support for biomass, neither in politics nor in the municipalities or society. Continuation definitely means the end of Vattenfall’s credibility when it comes to their intentions regarding sustainability.” 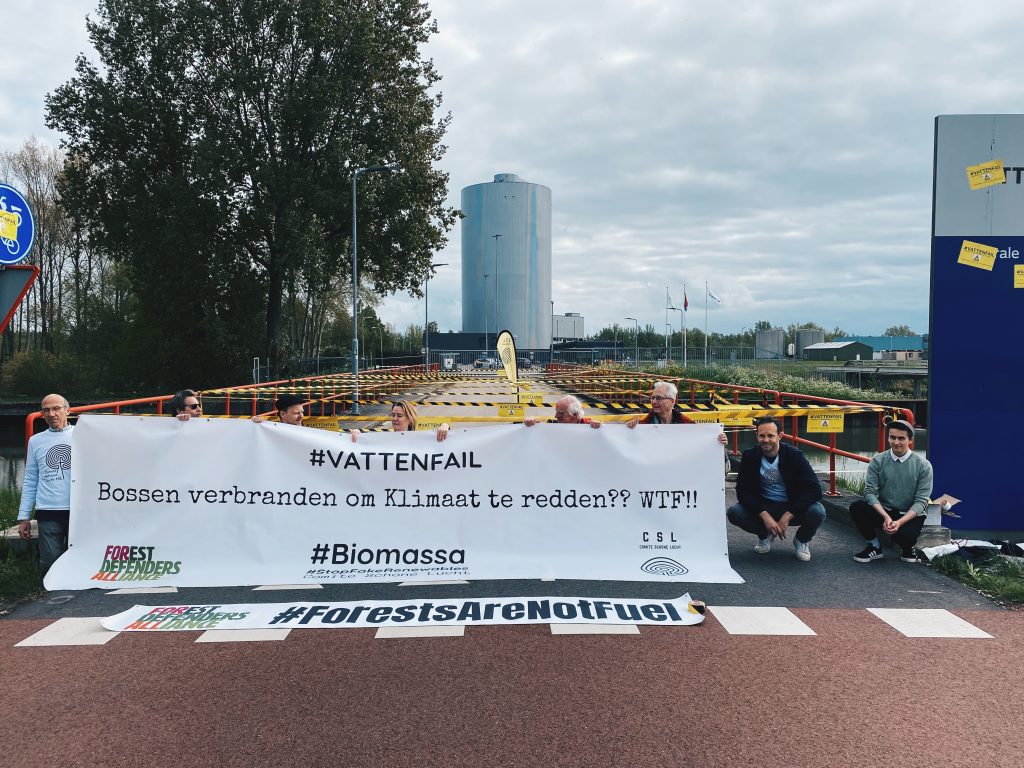 In Berlin, climate and environmental groups including Deutsche Umwelthilfe (DUH), Naturschutzbund (NABU), Naturfreunde Deutschlands and ROBIN WOOD rallied in front of Vattenfalls powerplant Moabit. In Moabit Vattenfall is burning coal as well as wood biomass– planning to expand the latter considerably. In other power plants in Berlin, Vattenfall is preparing to replace coal with fossil gas.

Ronja Heise, Energy Campaigner from ROBIN WOOD, who took part in the banner protest, said “There is no time left for weak excuses! We need to radically decrease our energy consumption and switch to real renewable heating and electricity. Studies show that this is absolutely feasible. Berlin could become a model city for renewable heat-supply. Burning wood or fossil gas instead of coal is just switching from one problem to the other. Emissions have to decrease now!” 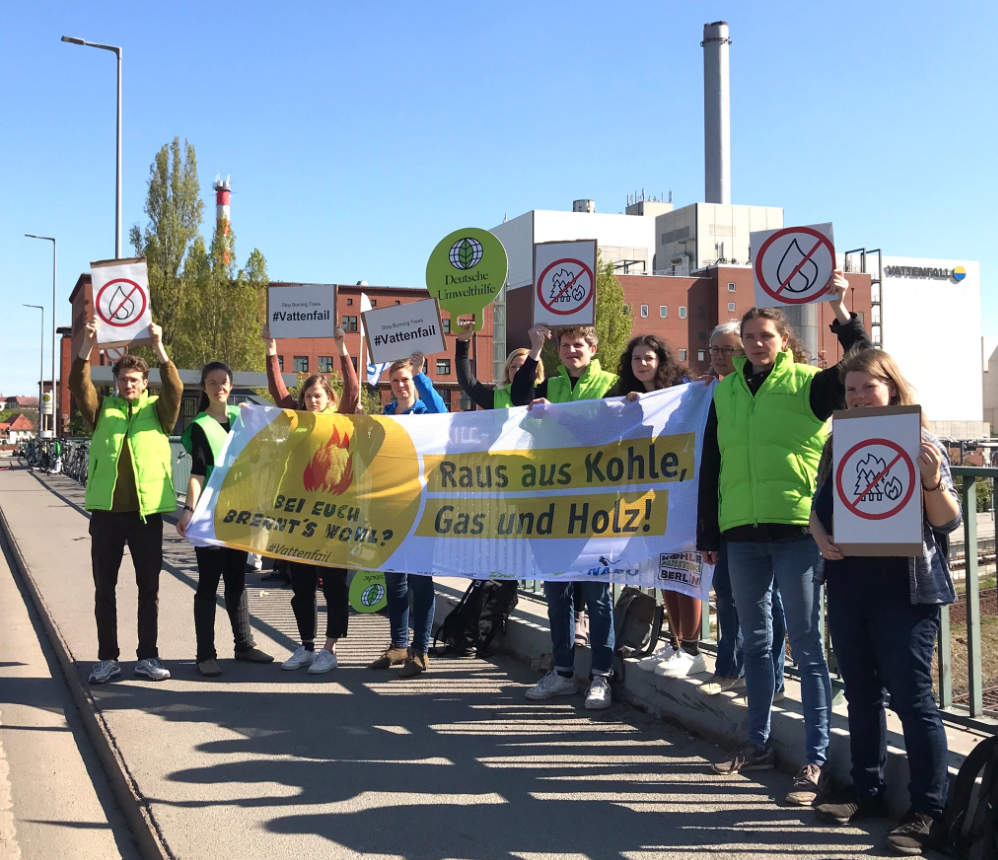 In Sweden, Lina Burnelius from Protect the Forest Sweden stated: “Being ’fossil free’ means nothing if it doesn’t result in decreased emissions. We must phase out all fossil fuels immediately, but we can not replace them with other destructive high-carbon fuels. The science is clear; we need to decrease our emissions at the source, while simultaneously increasing the forest carbon stock, whereas burning of forest biomass does the opposite; over the coming decisive decades, it will both increase emissions and decrease the forest carbon stock.”

“Tomorrow I will attend Vattenfall’s annual meeting and ask them why they decided to put their effort and money on greenwashing instead of starting the much needed energy transition that the climate crisis urgently requires of us”, said Lina Burnelius from the NGO Protect the Forest Sweden.

And in London, Dorian Wainwright from Biofuelwatch who is joining in a banner protest outside the Argus Biomass industry conference, said: “A Vattenfall representative will be speaking here about opening up ‘new supply markets’ for wood pellets. Existing wood pellet supplies are linked to large-scale degradation and increased logging of carbon rich forests, loss of wildlife habitat, and environmental injustice against communities living next to pellet plants. The last thing we need is to see those harmful impacts replicated in yet more countries and regions.”

Photos from the actions today will be / are available here