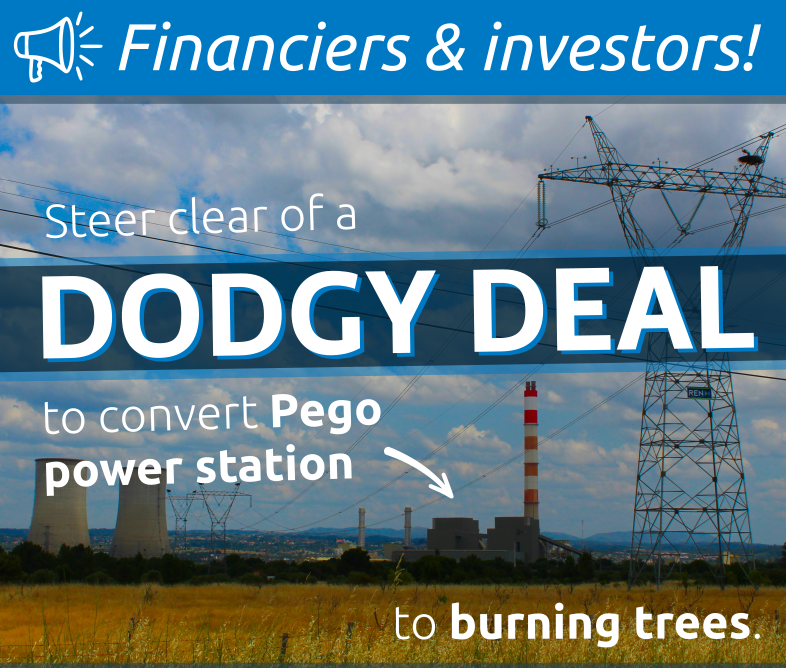 Portugal to decide on future of Pego power station by late February.

The Pego power station in Portugal represents a high risk for investors and financiers, according to a “Dodgy Deal” briefing [1] published today by five environmental groups [2], who urged funders to steer clear of financing the proposed conversion from burning coal to firing wood pellets. Campaigners also warned that converting the plant to wood pellets would have severe environmental and climate impacts, as well as prolonging adverse impacts on public health locally due to air pollution and wood dust exposure. [3]

The results of a public tender for the power station’s coveted grid connection point will be published in late February, and although few details have been released so far, half of the proposals currently under consideration by the Portuguese government could involve a biomass conversion.

Although Pego power station stopped burning coal in November 2021, the main shareholder, TrustEnergy, wants to re-open it and burn wood pellets instead. TrustEnergy is a joint venture between the French energy company Engie and the Japanese trading and business conglomerate Marubeni Corporation.

Vanguard, BlackRock, SMBC, Mizuho, BNP Paribas, Crédit Agricole and Société Générale could all potentially finance TrustEnergy’s planned conversion given their existing financial stakes in Engie and Marubeni. Additionally, most of these investors incorrectly define biomass as renewable energy, and do not have policies in place to mitigate any of the risks associated with burning biomass.

Nuno Forner from the Portuguese NGO ZERO said: “Burning large quantities of wood pellets for energy has no part to play in a just and green energy transition. It will inevitably lead to more forests being logged, whether in Portugal or overseas, and result in a carbon debt of many decades. We cannot afford this if we are to have any hope of limiting global warming to 1.5 degrees.”

Karen Vermeer, Coordinator of the Environmental Paper Network’s Finance Working Group said: “Investors and financiers must send a clear message to Engie and Marubeni Corporation. Energy companies need to move towards low-carbon renewable energy, not replace one high carbon fuel with another. The polluting Pego power station belongs to the past and must not open again.”

In June 2021, over 60 environmental groups including nine Portuguese NGOs wrote to the Portuguese Government and European Commission, urging them not to sanction the use of public funds to support a biomass conversion [4].

In early 2021, an open letter sent to world leaders by 500 scientists [5] warned that  burning wood emits more carbon dioxide than burning coal per unit of energy, and that the harm done cannot be undone even if new trees sequester the same amount of carbon in decades to come.