The Good, the Bad and the Ugly: Logging Loophole at the Heart of Glasgow Declaration 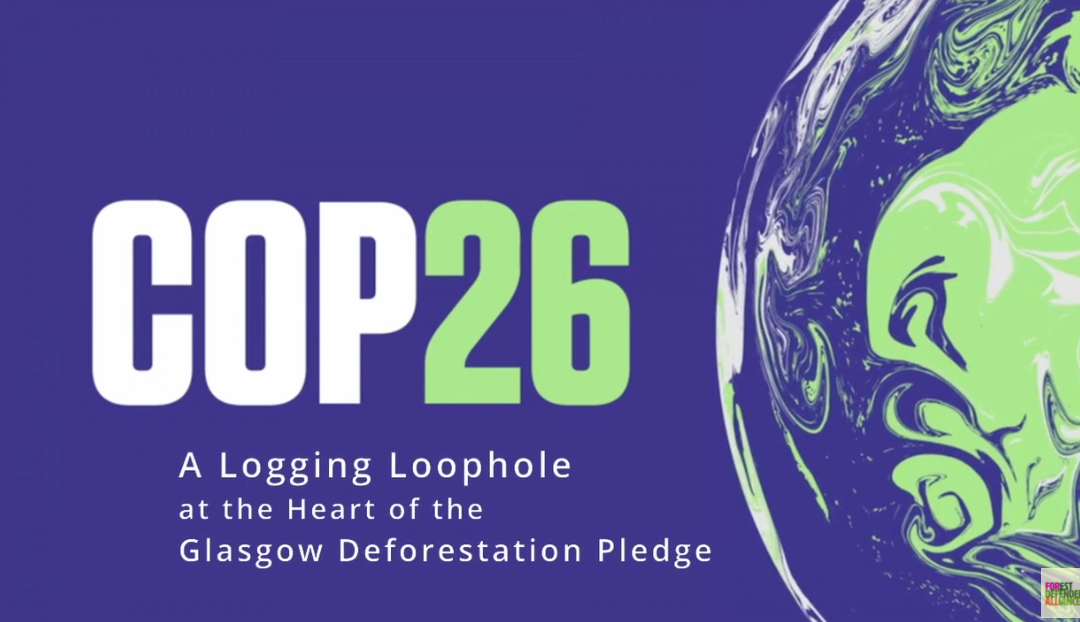 In a rare feel good moment in Glasgow, world leaders stepped into the spotlight at the climate negotiations to sign their declaration on ending deforestation and land degradation. Here at least, against the background of a Climate Code Red and disappointment that even this had not hastened the incremental pace of change nor secured commitment to a coal phase out, seemed to be hope that ongoing destruction of the world’s forests will be tackled.

Not part of the actual climate negotiations which diplomatic representatives would continue to engage in on behalf of their nations, this was in many ways a “feel good” opportunity for world leaders that created an impression of commitment to action during the early days of the conference. The declaration itself has no formal status at the UNFCCC and no mechanisms for ensuring compliance and transparency.

The reality behind the words of the Glasgow Leaders’ Declaration on Forests and Land Use is a mix of hope, deceit, and illusory promises.

All the logged areas you see in the video below are exempt from the declaration.

141 countries have now undertaken to end deforestation by 2030 as more countries join the original 100 signatories. Forest protectors note that the 2014 New York declaration on forests’ deadline of 2020 has been missed and we now see a delay by a decade before results are expected in 2030. Perhaps that new 10 year delay is why bad actors like Brazil signed up.

Nonetheless, an end to deforestation is the aim. Accelerated restoration of forests and other terrestrial ecosystems is also there. We all want to see these come to pass as soon as possible.

However, it’s important to understand what constitutes deforestation at the United Nations:

“Deforestation is the direct human-induced conversion of forested land to non-forested Land”. (1) It is a complete land use change. This entails total destruction of forest and its replacement by another land use such as agriculture (including conversion to oil palm) or to development, for example.

There’s a logging loophole. Industrial logging of forests is not included in the declaration. Clear cut logging and other destructive logging methods used to produce wood for the pulp and paper and biomass industries continue with unrestrained business-as-usual. Even the conversion of natural forests to monoculture tree plantations is not tackled.

All the logged areas you see in this video are exempt from the declaration.

There’s an endorsement of sustainable forest management in the declaration instead of any effort to restrain industrial logging, a term that is often greenwashing outrageous environmental damage whilst reassuring the forest industry that ongoing supply is guaranteed. “Sustainable” refers to wood supply, not ecology.

The pulp and paper and the biomass industries both particularly benefit from their exclusion from the promised forest protections. These closely related industries rely on clear cutting and barely restrained clearcutting methods typical of modern integrated logging operations (such as lonely clumps of trees in a sea of clear cut wasteland). It’s how they obtain the big volumes of lower grade logs utilised for woodchip and wood pellet manufacture.

The old days of selective logging of a small number of single stems from a more or less intact forest have been largely superseded to facilitate mass extraction and mechanisation. The production of a few sawlogs for high value timber is claimed to be the primary purpose of logging operations, but the large volumes of pulp logs and residues bring lots of money. The price per unit of weight or volume is lower than that of a top quality log, but the total income from the vast amount of the lower grade wood makes the operation much more profitable. Frequently this is the major source of income from logging the forest.

This is accentuated further when biomass energy is subsidised under climate policies such as Europe’s Renewable Energy Directive or Japan’s Feed in Tariff, and that financial gift flows through the chain of custody from power generators back to the company taking logs from the forest. These industries have become major drivers of forest destruction and conversion to monoculture plantations under the industrial logging model.

Conversion to plantations sees industrialisation of the landscape defeat pesky diversity of species that simply get in the way of focused production of single stems of the desired feedstock, all growing in straight rows to facilitate efficient management and logging. By then the communities that owned and relied on the natural environment have been expelled.

How can this exclusion of industrial logging from a declaration on deforestation that one assumes is meant to restrain broad scale damage to forest landscapes be so? Why isn’t a clear cut wasteland considered to be an example of deforestation? Why isn’t dispensing with all natural biodiversity and the conversion of that forest to the ecological desert of a monoculture plantation a complete land use change?

It all comes down to definitions, to what some call fine print and what campaigners often refer to as the weasel words (apologies to weasels).

Here for your edification is the definition of forest that is in official use at the United Nations Framework Convention on Climate Change (UNFCCC) – please bear in mind while you read this that far from being an academic exercise, this definition is what insulates broad scale industrial logging and the forest industry from any restraint under the deforestation pledge:

“Forest is a minimum area of land of 0.05-1.0 hectares with tree crown cover (or equivalent stocking level) of more than 10-30 per cent with trees with the potential to reach a minimum height of 2-5 metres at maturity in situ. A forest may consist either of closed forest formations where trees of various storeys and undergrowth cover a high proportion of the ground or open forest. Young natural stands and all plantations which have yet to reach a crown density of 10-30 per cent or tree height of 2-5 metres are included under forest, as are areas normally forming part of the forest area which are temporarily unstocked as a result of human intervention such as harvesting or natural causes but which are expected to revert to forest”. (2)

Let’s unpack that. Forest cover is the main thing here, not the species richness nor the carbon density – so it’s not addressing core issues for climate and biodiversity. It doesn’t care whether there is natural forest or plantation.

That forest cover can be really sparse – countries can choose between a mere 10% to 30% tree crown cover as the minimum threshold for a place to be defined as a forest. That’s not much tree cover. Further, trees in such a place don’t have to be anything more than seedlings – they simply have to be capable of growing to a minimum height of 2-5 metres at maturity (again, countries can take their pick of how low their threshold for tree height is from 2-5 metres).

It gets worse.  This sparse tree cover and puny trees don’t even have to be there, it’s sufficient that one day they will grow to fulfil those criteria.

The coup de grace. Areas where there is no forest or even the beginnings of a forest still qualify as a forest! Temporarily unstocked forest as a result of clearcut logging, for example, simply has to be expected to revert to forest. How long could ‘temporarily unstocked’ be? The answer is: for up to 50 years! (3)

It’s hard to imagine how less like an actual forest a “forest” defined like this could be. But hey folks, it sure helps give an impression that there’s a lot more forest going around than we can actually see. It also means that the forest biomass industry and the pulp and paper industry continue unchecked because their logging practices and the resulting depletion of actual forests, wildlife and carbon stocks don’t get picked up. We know from responses of loggers that they were assured that they would be unaffected.

Most people are not aware of this huge loophole at the heart of the leaders’ declaration, and nobody associated with the declaration was inclined to unmask the deception.

Hope on the horizon?

A dawning recognition of the importance of tackling the biodiversity and climate crises together is underway at the UNFCCC. Major global intergovernmental assessments, including from the IPCC and the IPBES, have demonstrated that loss of biodiversity and climate change are strongly interlinked, with each exacerbating the other. An increasing body of literature highlights the importance of intact resilient ecosystems in meeting the goals of the Paris Agreement.

Genuine natural solutions, with appropriate safeguards and respect for the vital role of indigenous peoples as the best protectors of forests, can provide a significant contribution to keeping carbon out of the atmosphere and to drawing carbon back down via sequestration in living plants and in forest soils.

Helpful language has been included in the Glasgow decisions, which:

“Emphasizes the importance of protecting, conserving and restoring nature and ecosystems, including forests and other terrestrial and marine ecosystems, to achieve the long-term global goal of the Convention by acting as sinks and reservoirs of greenhouse gases and protecting biodiversity, while ensuring social and environmental safeguards;” (4)

This now has to be activated, and the contradiction of logging and burning forests as a climate solution ended, since keeping them in place is paramount.

Additionally, the FAO has actually called out the use of forest cover as insufficient – they recognise in their Global Forest Resource Assessment 2020 that “forests encompass a wide range of ecosystems that vary considerably in their characteristics, such as in species composition, structure and the extent of modification by humans and by non-human factors. Thus, forest area is an insufficient parameter, on its own, for identifying important trends and assessing progress…” (5) (our emphasis). They have elaborated classifications that distinguish natural from planted forests, and subcategories of these. It’s far from perfect, but can be used to push the UNFCCC to also recognise the need to reform its forest definition to distinguish ecosystems and the quality and quantity of their carbon storage. The aim is to then target the most effective places in the landscape to prioritise for retaining carbon and biodiversity, and to move depleted forests into restoration.

There’s a long way to go to get to where the world’s climate body needs to be on forests and climate, as demonstrated by the careful wording that excludes huge swathes of forest damage and destruction from the deforestation declaration. We will be fighting the same forces that secured the forest definition and also secured the failure to account for smokestack emissions of biomass energy in energy sector carbon accounts.

It has taken a long time to obtain our small advances in a deliberately impervious environment, but change is afoot. We have to persist. The IPCC said that we have to bring fossil fuel emissions to net zero and also draw carbon out of the atmosphere if we are to stay below 1.5 degrees of dangerous warming. Without the vital contribution of forests we simply can’t make it.

(1)  Marrakesh Accord Decision 11 CP.7; Definitions, modalities, rules and guidelines relating to land use, land-use change and forestry activities under the Kyoto Protocol

(2) Marrakesh Accord Decision 11 CP.7; Definitions, modalities, rules and guidelines relating to land use, land-use change and forestry activities under the Kyoto Protocol, page 58.