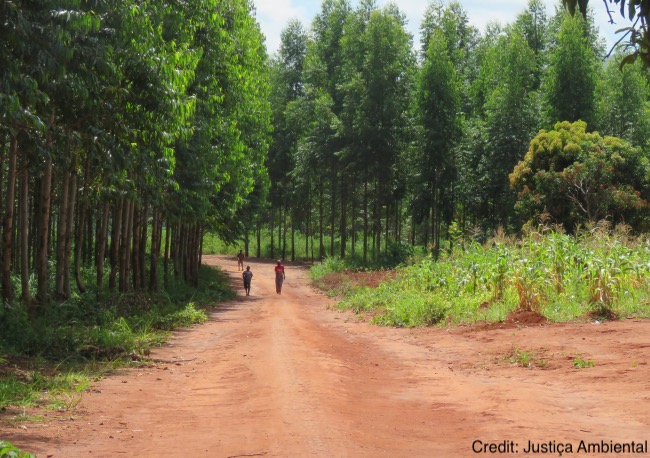 The first delivery of eucalyptus trees to Aveiro in Portugal from the port of Beira in Mozambique has been received with strong criticism by Mozambican and Portuguese groups and two international coalitions. The wood is from eucalyptus plantations operated by Portucel Moçambique, a subsidiary of The Navigator Company, and will be used in pulp and paper mills in Portugal. Two more deliveries are expected this year with a total volume of 100,000m3 of wood.

NGOs have also appealed to the World Bank to withdraw its financial support for Portucel’s plantations. The International Finance Corporation, owned by the World Bank, controls about 20% of Portucel Moçambique’s shares, and the Forest Investment Program, another World Bank initiative, is helping to finance the planting of the first 40,000 hectares. This was included in Mozambique’s pledge to “restore forests” under the Bonn Challenge and the African Forest Landscape Restoration Initiative (AFR100), which were launched alongside the signing of the UN’s Paris Agreement in 2011.

Kwami Kpondzo, Africa regional coordinator for the Global Forest Coalition stated: “The World Bank is giving Portucel millions to plant eucalyptus in Mozambique under the false pretext that afforestation with plantations can help solve climate change. The opposite is true. Converting forests and agricultural land to plantations releases large amounts of carbon. In addition, the wood is shipped thousands of kilometers just to be turned into short-lived paper products such as office paper, toilet paper and supermarket packaging, or burned to generate electricity in Navigator’s pulp mills.”

Portucel Moçambique has been granted 356,000 hectares of land in the provinces of Manica and Zambézia in central Mozambique to establish eucalyptus plantations on, which is more than three times the area that The Navigator Company controls in Portugal. So far, only 13,500 hectares have been planted, but already a large number of communities have accused the company of violating their rights. [1]

Anabela Lemos, director of Justiça Ambiental in Mozambique stated: “Portucel Moçambique says that its plantations are improving the living conditions of rural communities and bringing economic development to Mozambique. In reality, this neo-colonial project is usurping the land and livelihoods of thousands of peasant families, leaving them with no options for their lives. While peasant families lose everything that is most valuable to them, Portucel exports low-value wood more than 11,000km to supply Navigator’s factories in Portugal and claims that this is contributing to their development. The promises made to communities of jobs, better lives and improved infrastructure have all been broken.”

Sergio Baffoni, campaigner with the Environmental Paper Network, said: “The wood-fibre plantations planned by Portucel Moçambique have turned into a boomerang for local communities and the environment. The plantations have spread over people’s land and over some of the last remaining miombo woodlands, causing pollution, soil erosion, loss of biodiversity, increased risks of water shortage and forest fires in an area already prone to drought.”

NGOs working in Mozambique, Portugal and internationally have called on the Mozambican government to revoke Portucel Moçambique’s land concessions due to the negative impacts that the plantations are having on the livelihoods and food security of rural farming communities in the areas that have been planted. Across Portucel’s concession areas, 24,000 families could be impacted by future plantation expansion.

Paula Silva, a member of Quercus in Portugal stated: “Portugal’s eucalyptus plantation model is being exported at great cost to communities and biodiversity in Mozambique. We don’t want The Navigator Company to replicate the impact it has had here in Portugal in Mozambique or elsewhere, where decades of influence over policymakers have led to the deregulation of the forestry sector and huge impacts on the environment.”

João Camargo, a member of the climate justice collective Climáximo in Portugal, reminds us that “The Navigator Company’s practices mimic a colonialist extractive model, where African countries are treated like a mine. Everything is extracted at low cost with enormous damage to the Mozambican people, and there are rich rewards for the shareholders of multinational companies. On top of this, despite enormous publicity efforts, industrial forest plantations are not a solution to the climate crisis. They are not forests and they have only one objective: to make a profit, even if this implies the destruction of native forests, soils, waters and communities. This is the pulp and paper business model, a capitalist model based on plunder.”