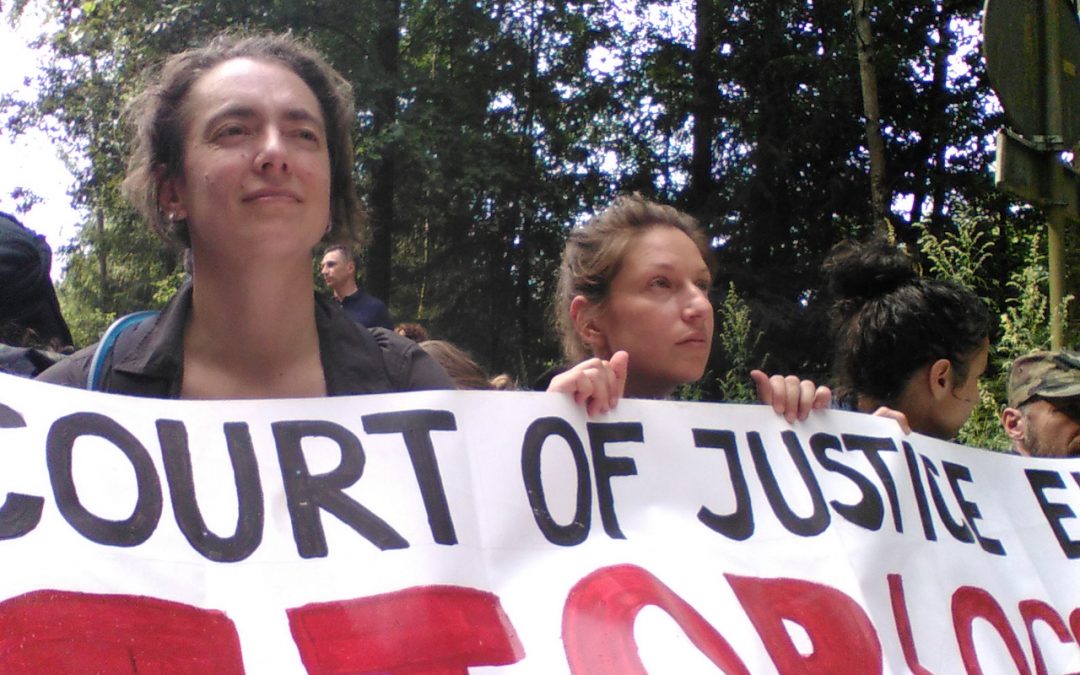 Milieudefensie (Friends of the Earth Netherlands) works towards a fair and sustainable world in bringing people together to urge governments and companies to make better choices. EPN reached out to Danielle van Oijen, Forest Campaigner at Milieudefensie

EPN: Danielle, how did you become engaged in ENGO work?
Danielle van Oijen: I studied forest management in the 1990’s and I joined several action groups like Greenpeace during that time. I started working on “conflict timber” from Burma, which is still imported in huge quantities into the Netherlands until today. When I started looking for a job, I found one at Milieudefensie as a forest campaigner to work on illegal logging and related trade. After that I worked for Greenpeace on the Congo logging campaign, but then finally came back to Friends of the Earth. Our grassroots network is very close to my heart and I think rights-based campaigns are most effective to protect forests and human rights. That’s the place I want to be in the spectrum of the NGO community.

Are you confronted with paper related topics in your everyday work?
Currently, I am coordinating an international forest program on the drivers of deforestation. In this context we work with groups like Walhi in Indonesia and SAM in Malaysia and pulp and paper is clearly one important driver of deforestation in these countries. However, in our work we do not focus on just one driver. We look into how we can promote system change, for example through regulations of the financial sector or due diligence legislation in Europe. And work with communities that want access to justice and use grievance mechanisms or litigation when their land rights are violated. In that sense, it doesn‘t matter for what sector the forest is destroyed, whether it’s for pulp and paper or palm oil or other commodities.

Does Milliedefensie campaign on paper consumption issues in the Netherlands, for example wasteful paper packaging for Amazon?
Not anymore. We did that a long time ago but changed our strategy in order to follow the money that is funding deforestation. Nowadays, we focus on the financiers, and work together with other NGOs that campaign on consumption.

Sometimes the Netherlands are described as a “Polder-Democracy”, where dialog is often more appropriate than confrontation. How is this reflected in NGO work in your country?
NGOs in the Netherlands are very eager to have a seat at the table. Sometimes I feel like this seat is more important than the result, which can turn out to be just a bad compromise – like the one on biomass – where NGOs agreed upon co-firing of woody biomass in coal power stations. But it can also be a good thing when NGOs outside of those roundtables, with a more system-based approach like Milieudefensie, expand and open up the space for organisations at these negotiation tables. Another example of a bad compromise is how the dutch government and most companies depend on certifications for their policies or due diligence. They trust these systems, despite all the publications and reports from local communities in the global south: Certifications do not prevent human rights abuse, for example in plantations or regarding deforestation. Our stand is really that certification has many gaps and that it just backs the system of industrial agriculture and forestry, which is not sustainable at all.

But can certification be an orientation for consumers?
It depends on the individual label, but from our point of view change doesn’t come from consumer behavior. We should speak up in our role as citizens towards policy makers and financiers and call for the system to change.

And what is the value for Milieudefensie being part of the Environmental Paper Network?
Many Friends of the Earth groups and groups that are close to us, are EPN Members. Therefore, we work with a lot of EPN Members on a daily basis. Besides, EPN is also a good source of being updated.