Can certification save the world’s last remaining forests? 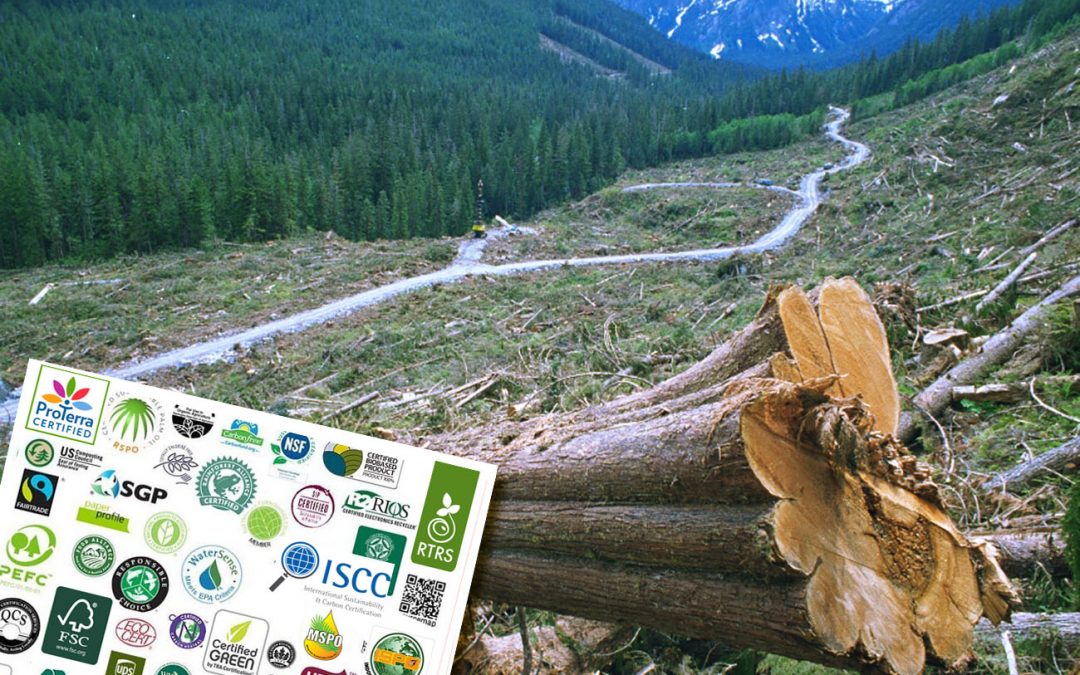 In the lead up to the International Day of Forests on 21st March, a new Greenpeace study goes beyond the discussion of specific failures and weaknesses of individual certification schemes, and raises the question of whether certification is still a useful tool in its current format, or if new paths towards forest protection should be explored.

In a recent study on certification schemes, Greenpeace wonders whether these schemes are still effective to prevent forest and ecosystem destruction and the abuse of human rights. It is time to take stock after 30 years of certification in the forest sector because, despite the existence of the certification schemes, products from deforestation still manage to slip through the system and enter global markets.

Certification’s early development stems from the campaign to boycott tropical timber, which had some success in the 1980s. These were the years of the brutal killing of Chico Mendez, when people all over the world realized what was happening in the Amazon rainforest. Boycotting all timber coming from developing countries such as Brazil, however, seemed to be pretty much a “western” response, and quite unfair: if Europe built its own development by clearing forests – both in Europe and in its former colonies – how could it now curb other countries’ development in the name of the environment?

Seeking ways to encourage economic development in these regions, and guaranteeing welfare to their people in a green and responsible way, the global community developed the Forest Stewardship Council (FSC), a forestry certification system based on the balance between economic, environmental and social interests, and between the North and the South regions of the world.

At the beginning, it worked pretty well. Visionary forest operators started to follow its principles, finding an enthusiastic market reception, thanks to the promotion work of NGOs. Environmental groups also effectively watchdogged the few certified forest operations, assuring their full integrity. Meanwhile, certification grew, and expanded to include other commodities, such as soy, palm oil, coffee, chocolate, biomass and more.

But certification is a victim of its own success. Thanks to the promotion made by NGOs, certification became mainstream on the market. For FSC this resulted in being hijacked by the industry which “cloned”  the idea to create weaker (or even rigged) schemes and product labels, creating downward competition towards cheaper, less credible and less meaningful certification processes.

When certification became a needed requirement in growing market segments, it started to attract a number of less visionary and often unscrupulous companies, seeking to “green label” their products and place them on the international market. While the number of certified operations rocketed, the business influence became stronger and stronger inside the process, and the corporations’ lobby became able to condition and weaken certification rules. It is not the certification’s fault if businesses are quick in exploiting any opportunity to their own advantage.

At this point, the environmental NGOs community was overwhelmed by so many certified operations and practically unable to effectively carry out its watchdog function: it was like trying to hold back the tide with a broom. A growing number of  NGOs became disillusioned in the certification practice and started to pull out of surveillance operations.

The Greenpeace analysis goes on to identify some inner weaknesses in these schemes, which are embedded in the very concept of certification. The first of them is that certification is based on the market, and market campaigns are a powerful tool for change. However, they tend to push the responsibility to protect forests onto the final consumer, which is frequently overwhelmed, and deceived, by a confusing number of logos and brands.

Public institutions increase deception using certification schemes as a shortcut instead of implementing legislation aimed at preventing illegal operations, biome destruction or human rights abuses. “Protecting forests and human rights isn’t a consumer preference like crunchy or smooth peanut butter – it’s a necessity” said Sini Eräjää, Greenpeace EU agriculture and forest campaigner, presenting the new study and demanding the EU to step up its action to protect the planet and its people by setting rules to ensure that no product linked to forest and ecosystem destruction or human rights abuses enters the EU market. This would be a good move, and not just in Europe. However laws can be ignored, or changed, and appropriate legislation alone is unlikely to be a silver bullet, unless it is matched by political will, environmental watchdogging, and growing consumer awareness.

The merit of the Greenpeace paper is to go beyond pointing to specific failures or systemic weaknesses of individual certification schemes, which have been analyzed in detail. The paper goes further and raises important questions concerning whether and how certification is an effective tool and presents alternative strategies for discussion.

As a market-based tool, certification in itself could not stop the destruction of forests, their degradation, land-grabbing and human rights abuses, often because markets are very flexible and such schemes often resulted in pushing deforestation to other regions, or to move deforestation-linked products towards less enlightened market segments. Deforestation and abuses did not stop, they often just became less visible.

Furthermore, the document’s authors noted, certification may create a negative stimulus, making sustainable products more expensive. And, more importantly, certification is still dominated by a culture of consumption promotion (eventually a ‘better’ consumption) rather than promoting the needed reduction. This is a key failure, as overconsumption is leading to rapid depletion of natural ecosystems.

It is a growing concern. A few months ago an academic-based think-tank questioned the effectiveness of multi-stakeholder initiatives – which is a quite wider concept – reaching similar conclusions.

We cannot expect a market tool alone, like certification, to be able to protect forests and other ecosystems, to tackle the climate crisis, and to guarantee human rights and land tenure rights to local communities.  After three decades of certification schemes, and the links between man-made nature’s destruction, the global climate and human health highlighted by the Covid-19 pandemic, perhaps it is now time to assess the strategic and tactical “usability” of certification as leverage to achieve sustainable production chains. So far civil society has argued about specific performances of particular certification schemes. Is it time to debate whether, and under which conditions, certification can play a role in protecting the world’s forests and its inhabitants?