This article is a guest post by Oliver Munnion, Global Forest Coalition, Portugal. It was originally published in Forest Cover 63, December 2020. Global Forest Coalition will host a webinar on Thursday 21st January at 3pm Amsterdam time (CET) to explore their new report on corporate-capture as a driver of deforestation. REGISTER HERE. 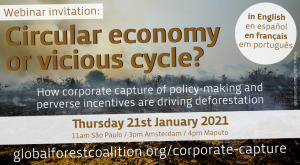 Presentations will look in-depth at the self-reinforcing cycle of the corporate capture of government policy-making and perverse incentives for harmful industries. Experts will focus on unsustainable livestock production, tree plantations and bioenergy, and discuss strategies for breaking the cycle.
In English with translation to Spanish/French/Portuguese.
————————————————————–

The Navigator Company (formerly Portucel) and owner of Portucel Moçambique is Europe’s biggest pulp and paper producer. The lobbying power of the company combined with a revolving door between the industry and Portuguese government has resulted in vast subsidies and financial support mechanisms and a dismantling of barriers to plantation expansion. As well as making Portugal the country with the highest proportion of eucalyptus plantations anywhere in the world, this is also driving plantation expansion in Mozambique, a former Portuguese colony, to devastating effect.

In their article “Portucel Moçambique: Your Profit is Not Our Development!” (see page 24 of Forest Cover 63), Justiça Ambiental describes how the company is riding roughshod over the rights and livelihoods of rural farming communities with its plans to plant over 300,000 ha of eucalyptus for its pulp and paper operations. A relic of Portugal’s brutal colonialist past is that Portuguese companies have privileged access to Mozambican markets, an incentive that encourages maximum profits for investors and minimum benefits to Mozambicans. The Navigator Company’s investments in Mozambique are therefore directly linked to how they have captured decision-making in Portugal, which ensures that strong subsidies and incentives keep their plantation model profitable.

In Portugal, perhaps the greatest impact that plantations have comes from their tendency to burn. Both pine and eucalyptus are extremely fire-prone, and vast areas of these single species plantations allow fires to be spread with great speed and intensity. 2017 saw the worst fire season in living memory in Portugal, where over half a million hectares of land burned and 115 people were killed, mostly during mega-fires in June and October. The pulp and paper industry has worked hard to deny any culpability for Portugal’s terrible fire problem, but if any good has come from the fires, it is that the role played by the industry in such wide-spread destruction is now at least widely acknowledged.(1) 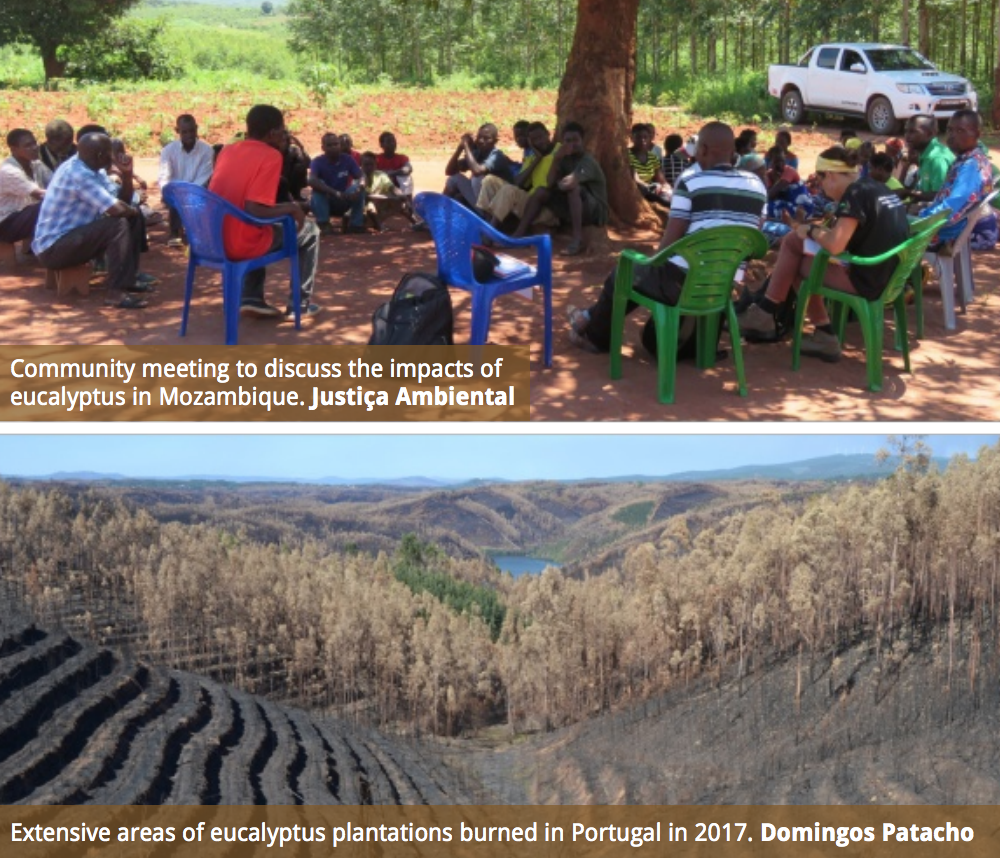 The pulp and paper industry in Portugal, led by The Navigator Company, exerts strong influence over decision-makers with its lobbying power, and numerous environmental public relations operations aim to turn public opinion in its favor by creating a “green” image and the illusion of sustainability. Decades of influence in successive Portuguese governments has paid dividends with the dismantling of forestry regulation and the unmitigated spread of eucalyptus plantations.(2) According to forestry expert Paulo Pimenta de Castro, “…in the absence of the state, [the pulp and paper industry] manages the market for wood and the country at its leisure.”(3)

At the end of 2017, a report by Susana Coroado,(4) vice-president of Transparency International in Portugal, provided valuable insight into the close links between the Navigator Company and the Portuguese government. In it, Susana described how Navigator’s president at the time, Pedro Queiróz Pereira, was the ninth richest man in Portugal and considered the 19th most powerful person in the country. Queiróz Pereira also financed political campaigns, and in the 2011 presidential elections donated the maximum amount allowed by law to the winning candidate.

Navigator’s lobbying tactics have also been heavy-handed when necessary. When the political party currently in government first came to power and promised to repeal a law that deregulated the expansion of eucalyptus plantations, pressure from the industry kept these plans firmly at the bottom of the priority list. As part of this pressure, the then president of Navigator threatened to end the company’s investment in Portugal completely, and suspended a 120 million Euro investment into one of its factories, threatening to relocate it elsewhere.(5)

Celpa, the association of pulp and paper producers in Portugal that represents Navigator and whose members control almost 200,000 ha of plantations, is also a lobbying force to be reckoned with. Recently, Celpa’s managing director, who was also Navigator’s Global Sales Director for 16 years, has been working hard to access up to 665 million Euros in funding for forests set out in the Program for Recovery and Resilience, an initiative responding to fire risk and the pandemic. He has called for a “balance” between forest conservation and production,(6) promoting the myth that well-managed eucalyptus plantations reduce fire risk and ignoring the fact that forests devoted to biodiversity conservation account for just 4.5% of Portugal’s tree cover, compared to 26% for eucalyptus plantations.(7)

The Navigator Company is also one of 16 companies involved in the “Act4Nature Portugal”
greenwashing initiative established by Portugal’s Business Council for Sustainable Development (BCSD). It is hoping to get its hands on 40 million Euros of government funding to pay landowners to “plant and manage forests”. Supposedly as a response to forest fires in Portugal, this funding looks set to finance the more profitable management of plantations rather than forest restoration.(8)

Coroado’s report also describes a revolving door between government and the pulp and paper industry. The current managing director of Agroges,(9) an agricultural company whose main customers are pulp producers, first joined the Portuguese government as an adviser to the minister of agriculture. He left that role and took up a job with Agroges, only to later return to the government as secretary of state for rural development and, when his term ended, returned to Agroges as its director. In another example, a former Secretary of State for Forests who held the position until 2003 was also formerly a Portucel employee. In addition, no less than nine former government members have also worked for the Semapa conglomerate at one time or another, which owns 77% of The Navigator Company.(10)

Following the fires of 2017, the Portuguese government approved several measures to ensure that such a tragedy could never be repeated again. Among these measures, it created a program for an “Integrated Management System for Rural Fires” and appointed Tiago Martins Oliveira as president who, for the previous 20 years, had worked for The Navigator Company. This wasn’t the first time that Oliveira had worked for Portugal’s current prime minister: in 2005 he was one of the technicians appointed to draw up the government’s forestry reform proposals.(11)

State subsidies and other public supports have incentivized eucalyptus planting with few regulatory barriers in the way of doing so. In 2017 alone, Portugal’s government made 18 million Euros available to increase the productivity of plantations, supplementing a 125 million Euro investment by Altri, a leading eucalyptus company.(12) A further 9 million Euros came from the EU via a rural development program to support the replanting of eucalyptus where plantations had already been cut three times. These areas are also considered to be at high risk for fire.(13) Portugal’s “Clean and Nourish Program” will also be investing 17 million Euros into companies represented by Celpa to help them manage eucalyptus plantations in the coming years.(14)

Tax breaks are another incentive, whether intended or not. At the end of 2019 the Portuguese government claims to have “forgotten” to impose a tax levied against pulp and paper producers which is a contribution towards the Permanent Forest Fund. The Fund was set up to plant slow-growing trees as part of efforts to regenerate the areas devastated by fires in 2017. In a clear indication that the government had no intention of collecting the tax retrospectively, the figure was left out of the 2020 budget altogether.(15)

International finance also plays a significant role, with the European Investment Bank (EIB) recently giving The Navigator Company 27.5 million Euros to replace a gas-fired generator with biomass boiler at their pulp mill in Figueira da Foz (which will also sell subsidized electricity to the grid) as part of the company’s aim to reach “net zero” emissions by 2035,(16) and was the eighth time that EIB has financed the company in recent years.(17) On top of this, The Navigator Company is heavily subsidized for selling electricity to Portugal’s grid, primarily through burning biomass, for which it receives millions of Euros each year.(18)

Perhaps unsurprisingly, the support received by The Navigator Company hasn’t filtered down into support for its own workforce in what has been an extremely challenging year for factory workers. The main union representing Navigator’s workforce claims that announcements made by the company about support for workers impacted by the pandemic are “pure fiction” and that all the company is trying to do is “silence its workers to ensure the uncontested distribution of 100 million Euros in dividends to its shareholders”.(19)