Climate Case Study: How stopping a pulp mill led to below net zero emissions in Tasmania

The community victory in 2011 which halted Gunns Ltd’s devastating pulp mill from being built in the state of Tasmania, Australia has some years later produced a stunning climate result, which was revealed in the recently released Greenhouse Gas Inventories of Australia’s States and Territories. In some rare good news for the climate, Tasmania’s planet heating emissions have fallen just below net zero emissions with a total of -2.2 Mt CO2-e in 2018 (the latest year for which statistics were published). That’s right, below net zero – an heroic result for any jurisdiction on the planet to have achieved.

How did it happen? The inventory report is clear: “Net emissions have declined by 111.2% on emission levels in 2005 due to reductions in emissions from the land sector, mainly resulting from reductions in native forest harvesting”.

See this extract from page 10 of the report: 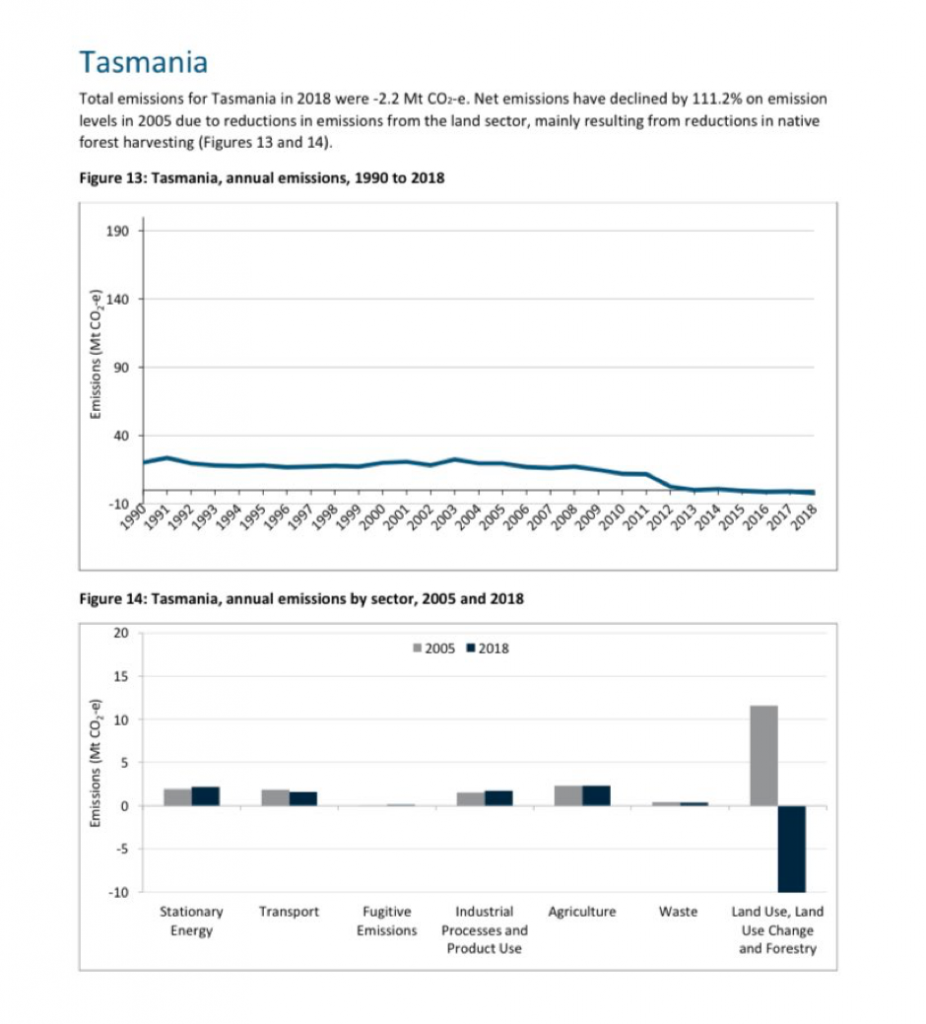 You can see from Figure 14, above, that other emissions sources remained stable. Stationary energy generation is mostly from renewable sources, being hydro and wind, and doesn’t figure prominently as a source of emissions compared to most places. Forestry emissions were the primary source until the change to logging of natural forests.

Tasmania’s unique emissions profile has thus given us a clear and unambiguous picture of how ending logging and leaving natural forests to keep on growing contributes to emissions reduction and then to ongoing removals of carbon from the atmosphere. Such contributions are known as “nature-based solutions”, or “natural solutions” in the climate world.

Whilst the theoretical impacts of such changes have been assessed and published over the past decade, here is a stark real life example of what can be achieved. The IPCC has made it clear that to meet a 1.5C target, but also for a 2C target, large near term emissions reductions allied with increased removals of carbon from the atmosphere will be required. In Tasmania logging was the primary emissions source and cessation has had the largest impact. Since then ongoing incremental removal of carbon from the atmosphere as those forests continue to grow contributes further.

Why did so much logging stop so suddenly in 2011? It wasn’t a policy decision of governments, it was that Australia’s largest woodchipper had overreached, pressing ahead with an unpopular and ultimately unsustainable push to build a pulp mill whilst it’s overseas markets were in revolt over the unacceptable destruction of high conservation value forests. The company had also embarked on an ill-advised SLAPP suit, targeting 20 prominent conservationists and NGOs (including the author) in an obvious attempt to stifle opposition to their odious pulp mill venture. When their remaining major customer in Japan dropped contracts, Gunns was without enough income, overextended on the pulp project and liable to cover costs of its failing court actions against the environment movement. They stopped taking native forest pulpwood and the company went into receivership.

Gunns had a virtual monopoly on the woodchip industry, having progressively bought out its competitors. The loss of the huge export woodchip trade demolished the major source of income for native forest logging operations in the state, making them uneconomic and exposing the rest of the industry to drastically reduced supply. The entire industry was going under.

The lie that the industry was “sawlog driven”, that logging was primarily for high value product, was exposed. The woodchip industry had been introduced in the 1970s as an “efficiency” measure to “clean up waste in the forest”. It drove a transition from selective logging to clearcutting the forests. By the turn of the century up to 7 million tonnes per year of woodchip exports left Tasmania to supply Japan’s pulp and paper industry. The reality was that at its height an average of between 80 – 95% of product taken from clearcutting operations was so-called waste wood, the actual mainstay and driver of native forest logging destruction.

The major impact on Tasmania’s emissions of forest industry collapse was immediate (Figure 13 above). The cessation of logging brought a massive reduction. So much for the claims of the forest industry that their “sustainable” PEFC certified logging regimes somehow contribute to the fight against climate change! On export, woodchips are counted as an instantaneous emission. The UNFCCC holds that use for pulp and paper results in an ephemeral product that finds its way into the atmosphere inside 2-3 years anyhow. So much for the vaunted carbon storage function of harvested wood products! It’s vanishingly small in such forestry regimes.

A moratorium on logging was put in place for substantial areas of Tasmania’s native production forests (around 500,000 ha), then some parts were listed under the World Heritage Convention and most of those eventually reserved. The remaining forests were placed in a holding pattern pending future reservation. This enabled all those forests to continue growing and keep contributing to climate change remedy by drawing carbon out of the atmosphere in ongoing, smaller increments.

The current Tasmanian government is quick to take credit for Tasmania’s great emissions result, but will not acknowledge how it has been achieved. On coming to power in 2014 they legislated to put over 400,00 ha of these forests back on the chopping block, and continually run rhetoric about rebuilding the native forest industry. Meanwhile the industry has substantially moved on, with most production and jobs now found in the plantations that had already been established and into which conservationists had been urging a transition for wood supply.

There is still conflict over the areas that remain dedicated to logging as impacts on threatened species and remaining old growth continue, and thus far have prevented Tasmania’s logging agency from gaining Forest Stewardship Council certification. There are further climate contributions to be made by securely protecting all these forests. It could even be a good little earner.

Instead government and the industry are talking up a new threat based on the same old claims of cleaning up waste and residues – burning forest biomass for energy generation. Worse, it’s claimed to benefit the climate as renewable energy, although the reality is that it’s just as emissive as woodchipping ever was. If the biomass industry takes hold who knows if or when such forests will ever be allowed to regrow to reabsorb those emissions? It certainly won’t be within time frames relevant to tackling global warming. Neither will it make the contribution that Tasmania has demonstrated can be achieved by just stopping and leaving the forests alone.

It seems obvious that such large and important gains in the fight against climate change should not be squandered. In the context of twin global environmental crises, climate and biodiversity crisis, we should seriously consider ceasing the industrial logging of natural forests. Here in Australia’s National Greenhouse Accounts is the evidence that ending logging works for the climate, despite rhetorical claims to the contrary by the forest industry. This is not simply a great outcome for climate and for nature in Tasmania, it provides inspiration and evidence for the rest of Australia and for the world.

The author is the Coordinator of EPN’s Forests, Climate and Biomass Working Group