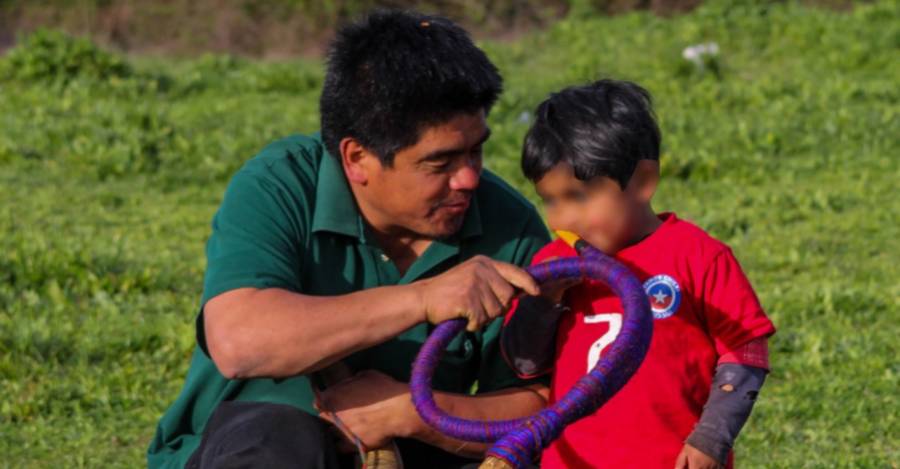 The day before he was murdered, Treuquil had given a radio interview to the University of Chile radio, in which he had denounced the death threats he had been receiving from the police (Carabineros) every time a patrol passed by. “I don’t know why they do it,” he said.

Treuquil leaves three young children. “My children cry, they say ‘mom, what are we going to do?’, And the little boy tells me that dad is in heaven, alive, and when an airplane passes by he says that it will bring dad back” – said Andrea Neculpán, his wife, in an interview.

Since the end of the dictatorship, the Mapuche communities have been trying to claim back the land that had been taken from them by the dictatorship, and given to the two major forestry groups, Arauco and CMPC (Mininco). The judiciary however, apart from a few exceptions, validates the property rights obtained through violence during the dictatorship, and considers as illegal these re-occupations of land by Indigenous communities. Consequently, the militarized police, the Carabineros, a  corp still marked by the time of the military rule and inclined to violence, is sent to oppose the Mapuche’s occupation of land and to restore order. As a result, the whole region has been militarized, and the land conflicts are being ruled applying the Antiterrorism law, dating back to the times of the dictatorship of Augusto Pinochet, a practice that has been condemned – with little avail – by the United Nations.

In the last two decades, several Mapuche activists have been killed, in many cases, in the context of land conflicts with pulp & paper companies. Here are a few cases:

Since the return to democracy, different commissions and political initiatives have been launched to tackle the “Mapuche issue”, but they never get anywhere. The experts provided recommendations, but  these have not been implemented.

Various international organizations, such as the Inter-American Court of Human Rights, the UN Human Rights Council or Amnesty International, have condemned the Chilean authorities for using the Anti-terrorism law against  indigenous peoples’ protests. Still no changes are seen on the ground. The land conflict has not been resolved, the Mapuche communities still try to recover their ancestral land, and their effort is met with violence creating new oppression.

Meanwhile, the land seized to the Mapuche communities and planted by Arauco, CPMC and other plantations companies, is also threatening the remaining natural forests and the global climate. In 2019 an EPN document highlighted that climate change is turning large scale pulpwood plantations, already prone to droughts, into a fire bomb.

In January 2017, a wave of fires devastated an entire region’s pine plantations in Chile, with more than 600,000 hectares of scrubland, plantations, agricultural land, native forests and homes devastated in what is thought to be the worst episode of forest fires in Chile’s recent history. It affected thousands of people. In the last decades Chile expanded its pulpwood plantations, which, as scientists say very clearly, “are contributing to the massive forest fires”.

Extensive forest plantations, another scientific study reveals, “favor the spread of fire, since they are composed of a type of dense and flammable fuel (mostly rapid growth pines and eucalyptus) that is continuously distributed throughout the landscape”.

Based on satellite image analysis of the American Landsat initiative between 1986 and 2011, scientists reported a loss of native forest of 33% in 25 years, “mainly due to the replacement by forest monocultures”.

Other scientific studies warn that “pulp plantations are draining the water supply”, and given the risks posed by their impacts in combination with climate change, demanded to “limit homogenous, and continuous exotic plantations to contain recurrent, intense, and temporally extended droughts for central and south-central Chile”.

It’s time for financiers and buyers of Arauco, as well as the FSC that certifies that company, to reassess their business relations and be aware that Arauco is involved in gross violation of human rights, while posing serious threats to the Chilean forests and to the  global climate.