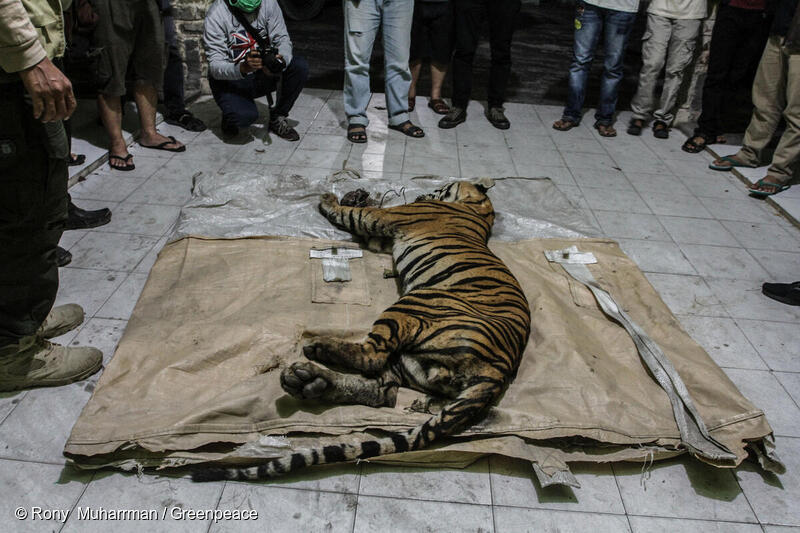 Jakarta, 4 June 2020 – The National Coalition to Preserve Natural Resources (GN-PSDA) has called on the Indonesian Ministry of Environment and Forestry to stop ignoring the environmental and criminal destruction caused by Asia Pulp and Paper (APP), one of the world’s largest paper producers. (1)

The Ministry chose APP as a sponsor of “Indonesia Climate Change & Environment,” an event planned for World Environment Day on 5 June, despite the fact that the company has been threatening Indigenous communities in the Riau and Jambi provinces, where it has pulp extraction concessions. The sponsorship announcement came just days after a Sumatran tiger was found dead in an APP concession.

The Ministry also invited an APP representative to speak at a session dedicated to “Building a New Paradigm and Public Awareness of Local Wisdom.”

Syahrul Fitra, Communication Director at AURIGA, member of the National Coalition to Preserve Natural Resources (GN-PSDA), said: “Inviting APP to talk about public awareness of local wisdom on a day dedicated to the protection of the environment and biodiversity shows little understanding of the situation. In the last two years, APP and its suppliers have repeatedly risked Indigenous Peoples’ safety and threatened endangered wildlife. If it is serious about protecting Indonesia’s environment and local communities, the government should review this decision.”

APP is not the only controversial sponsor of the event: despite wide global consensus about the urgency of phasing out energy from burning coal, to reduce greenhouse gas emissions, the event is being sponsored by coal mining companies that also control coal power plants in South Sumatra, PT Bukit Asam, PLTU MT Banjarsari, PLTU Bukit Asam, PLTU Sumsel-8. This is in sharp contrast with Indonesia’s declared objective to combat climate change and to preserve the environment.

The National Coalition to Preserve Natural Resources, a group of civil society organizations concerned with the rights of Indigenous Peoples and the protection of the environment, is demanding that the Minister of Environment and Forests:

A comprehensive mapping done by EPN, together with a coalition of Indonesian NGOs, revealed that APP’s affiliates or suppliers are involved in conflicts with 107 communities in 5 provinces in Indonesia ; West Kalimantan, East Kalimantan, South Sumatra, Jambi and Riau, involving around 350,000 ha of active disputed land and about 2 millions ha of potential lands conflicts.