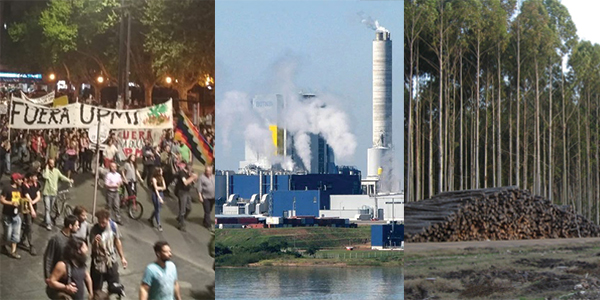 Social organizations from Uruguay, Finland and other countries, have published a letter which questions UPM’s greenwashing campaign. The company presents itself as a leading global corporation in the fight against climate change, but the letter provides the results of 15 years of scientific research which show the impacts of monoculture tree plantations on grasslands:

The undersigned entities and professionals denounce the fraudulent campaign of the Finnish multinational UPM Kymmene, whose main business is the production of cellulose in Uruguay from monoculture plantations of eucalyptus, in which it presents itself as a leading global corporation in the fight against climate change, the defense of biodiversity and the sustainable water management.

Diverse research – presented below briefly and more in detail in the annex attached to this our letter – show that it is false to claim like the UPM does that monoculture tree plantations that replace natural grasslands would favor and expand biodiversity or help mitigate climate change and prevent deforestation or would together with the cellulose plants contribute to sustainable water management.

Recently, UPM announced its incorporation into the “Business Ambition for 1.5 ° C” initiative launched by the United Nations Global Compact. UPM says it will strive to mitigate climate change and create innovative products, committing to reduce carbon dioxide emissions by 65% and to practice sustainable forestry.

At the same time, UPM noted that it is one of the six leading companies worldwide for its actions to mitigate climate risk, prevent deforestation and improve water management. UPM appeared in 2019 in the Triple A List of CDP, an entity financed by companies and governments that gives companies sustainability scores to guide investors. These scores are based on self-reporting and CDP does not evaluate the actual performance of the companies on sustainability issues.

In this way, UPM is developing a new campaign to convince investors, governments and populations of the Global South of the goodness of its projects.

The change of land use in the grasslands characteristic of South America – the Pampa Biome – is associated with the worldwide expansion of monoculture plantations with fast-growing exotic species for cellulose production with greater profitability for companies, but with very high cost for the communities that suffer them.

Testimonies of the negative social and environmental impacts of tree monocultures have been documented for more than 20 years by the World Rainforest Movement (https://wrm.org.uy/browse-by-subject/tree-plantations/).

In addition to the displacement of rural populations, these plantations affect local productions (food sovereignty), soil (acidification and loss of organic matter and minerals, among others) and water (scarcity in areas adjacent to plantations and pollution due to the use of pesticides).

For more than 15 years, scientists from universities in Argentina, Brazil, the United States, the United Kingdom and Uruguay, among other countries, have carried out a series of investigations on the impacts of tree monocultures and cellulose production that demonstrate the falsehood of the UPM propaganda.