Testimonies of impacts from pulp and plantations, at the People’s Summit 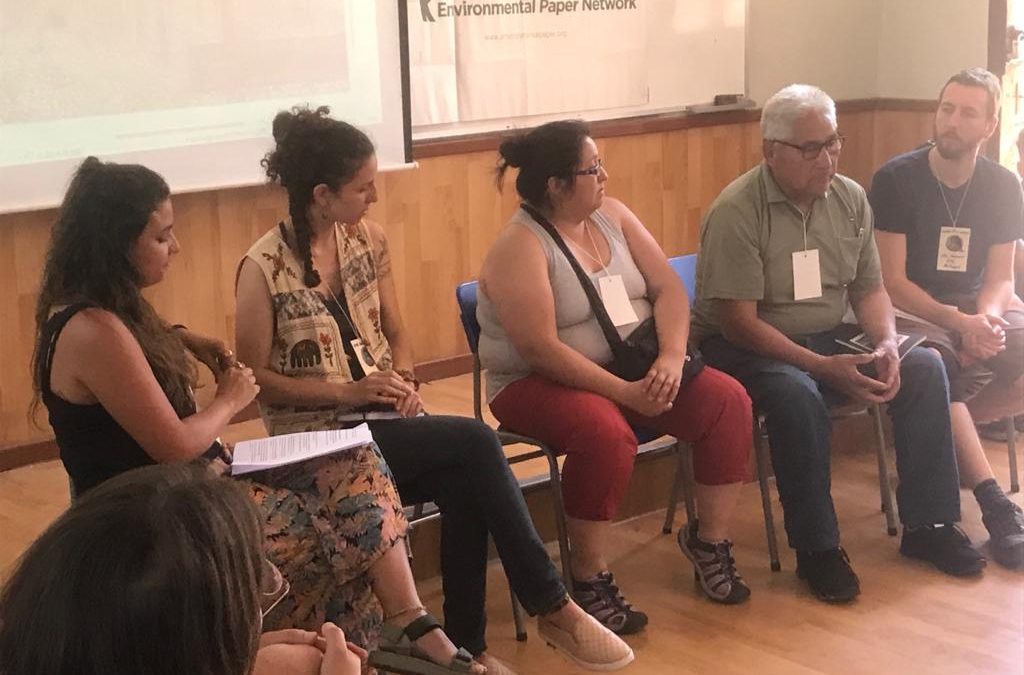 Yesterday, at an event organized by EPN and its partners at the People’s Summit, in Santiago de Chile, people from different regions and countries denounced the impacts caused by plantations for the pulp and paper industry, and discussed their similarities.

In Chile, the plantation industry made its great boom during the dictatorship of Pinochet, when the regime gave hundreds of thousands of hectares of land, traditionally owned by local communities, to plantation companies. Mapuche people who are trying to regain parts of their traditional territory, are facing tremendous repression from the state. Several regions have been militarised to protect the plantation business and protestors are facing strong criminalisation. In Brazil the military also plays a strong role in protecting the pulp and plantations industry as President Bolsonaro has put military people in charge of practically all environmental protection agencies. It was also with backing from the military regime that Aracruz Celulose established itself in Espírito Santo in the 1970s, planting trees on land that was traditionally owned by Indigenous and Afro-descendent people. Likewise, in Portugal, which relative to its total size has one of the largest areas of eucalyptus plantations, this expansion happened during the military dictatorship.

Portugal is also the European country which suffers most from wildfires. These tend to spread much easier through a monoculture of eucalyptus or pine trees, than through a natural forest. Unfortunately, wildfires are also a big problem in Indonesia, where large areas of highly inflammable peat have been dried to establish tree plantations, and in Chile, where thirsty eucalyptus trees are drying up water sources, turning areas of both plantations and natural forests into tinderboxes.

The high consumption of water by fast growing eucalyptus plantation has led many springs, creeks, lakes and even rivers to dry up. In Chile many local communities are now dependent on water trucks for their water supply, at least part of the year. In Espírito Santo, Brazil, an extensive mapping exercise of the impacts of plantations on water resources has documented dozens of water bodies that are now dry, and similar impacts are reported by communities around Três Lagoas (Brazil), the world’s self-proclaimed pulp metropolis.

The plantations and the pulp industry also impact water quality. Many pesticides, including glyphosate, are used to keep the plantations alive. These leach out into the soil and the water, causing often long-lasting contamination. In Brazil, they are often applied by planes, that ‘forget’ to stop spraying when they fly over villages, schools, hospitals or community gardens, poisoning entire communities. But also on the ground, workers that apply pesticides are often exposed to high levels of contamination. For a long time, in Espírito Santo, it was the only job women could find in the plantations. Now the rate of myomas is six times higher than the national average among these women. And on top of this, there is the pollution caused by the effluents and the air emissions of the pulp mills themeselves. One of the most impactful cases is that of the pulp mill in Valdivia, which destroyed a protected nature habitat and decimated its population of black necked swans, by dumping its effluents in the river. In Três Lagoas, which is home to three large pulp mills, there are no independent figures on the quality of the river water, but local fishermen say most fish is gone.

The sharing of these experiences shows that social and environmental conflicts caused by the expansion of the pulp industry, and thus of the plantations industry, are not isolated cases, nor specific to a country nor a company. They are inherent to the sector. It also clearly shows that monoculture tree plantations are not a solution for the biodiversity and climate crisis the world is facing. To fight climate change, the world needs more protection and restoration of natural forests.

The video of the event can be seen here.