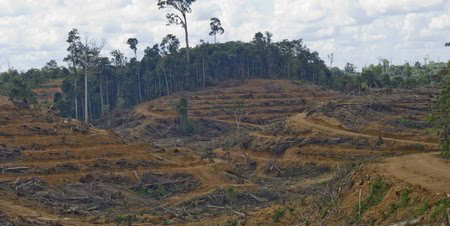 Jakarta – The Koalisi Anti Mafia Hutan released a report today finding that Indonesia’s two largest pulp and paper producers – the Asia Pulp & Paper (APP) and Asia Pacific Resources International Limited (APRIL) groups — violated their zero-deforestation commitments in 2018 by taking wood from a controversial supplier owned by Djarum Group. APP and APRIL made highly publicized commitments in 2013 and 2015, respectively, to stop destroying tropical rainforest. Both companies are responsible for clearing vast areas of rainforest and peatlands in Indonesia over the past two decades, including habitat for orangutans and Sumatran tigers.

The report’s findings come after the Koalisi Anti Mafia Hutan released satellite imagery in August 2018 showing more than 20,000 hectares of forest was destroyed (around 25,000 football pitches) on the concession operated by the wood supplier, PT Fajar Surya Swadaya, in East Kalimantan. In March 2019, APP publicly confirmed that the deforestation by Fajar Surya Swadaya occurred on High Carbon Stock areas, which are protected under each group’s sustainability policy. APRIL has denied the deforestation occurred on areas protected under its policy.

The findings in this report question the integrity of APP and APRIL’s zero-deforestation commitments, which the two groups have used to re-gain market positions lost because of poor environmental and human rights practices. APP recently was awarded the Green Label certification in Singapore, and the Forest Stewardship Council is considering to let APP back in after severing ties in 2007. APRIL’s pulp is used by its sister company Sateri to produce textiles, which are reportedly purchased by major clothing retailers such as H&M and Zara. Djarum Group is reportedly building a pulp mill in East Kalimantan. It has not yet adopted a policy to refrain from deforestation, peatland destruction, or exploitation of local communities.

The Koalisi Anti Mafia Hutan is a group of civil society organizations committed to raising awareness about corporate practices and government policies that endanger forests and peatlands and that threaten the rights of indigenous and local communities.

The report and NGO recommendations are available at: https://environmentalpaper.org/wp-content/uploads/2019/10/Borneo-Deforestation-Update-October-2019.pdf