The world’s tropical rainforests and the people who live in them are suffering continued tragedy from forest fires that are driven by the demand for agricultural commodities, including timber for pulp to make viscose, paper and packaging. In Indonesia, massive forest fires have been burning for weeks, and drained peatlands having been smoldering, causing a toxic haze to spread as far as Singapore and Malaysia. Thousands of schools have been shut across Sumatra and Indonesian Borneo due to air pollution from the forest and peat fires, and Indonesian authorities closed an airport on Sumatra island on Friday due to poor visibility caused by smoke. In the province of South Sumatra alone, officials reported 32,000 cases of respiratory tract infections in the last five weeks, almost half of them under the age of five years old. Startling images and video of the burning of forest and land have been seen around the world.

“The current situation in Riau is sad and depressing,” said Woro Supartinah, a resident of Pekanbaru in Riau Province in Sumatra, and a Steering Committee member of the Environmental Paper Network – International.

Ms. Supartinah reports that the air quality has been extremely unhealthy, and measurements of Particulate Matter in the air have been drastically above safe levels. Recorded levels in Riau of PM10 ( particles with a diameter of 10 micrometers or less, and able to reach deeper in the respiratory tract) have vastly exceeded safe levels of under 150 µg/m3, reaching all the way to levels of almost 450 µg/m3 on 19 September. Estimates are that during January to September 2019 more than 300,000 people are suffering from acute respiratory infection in Riau. 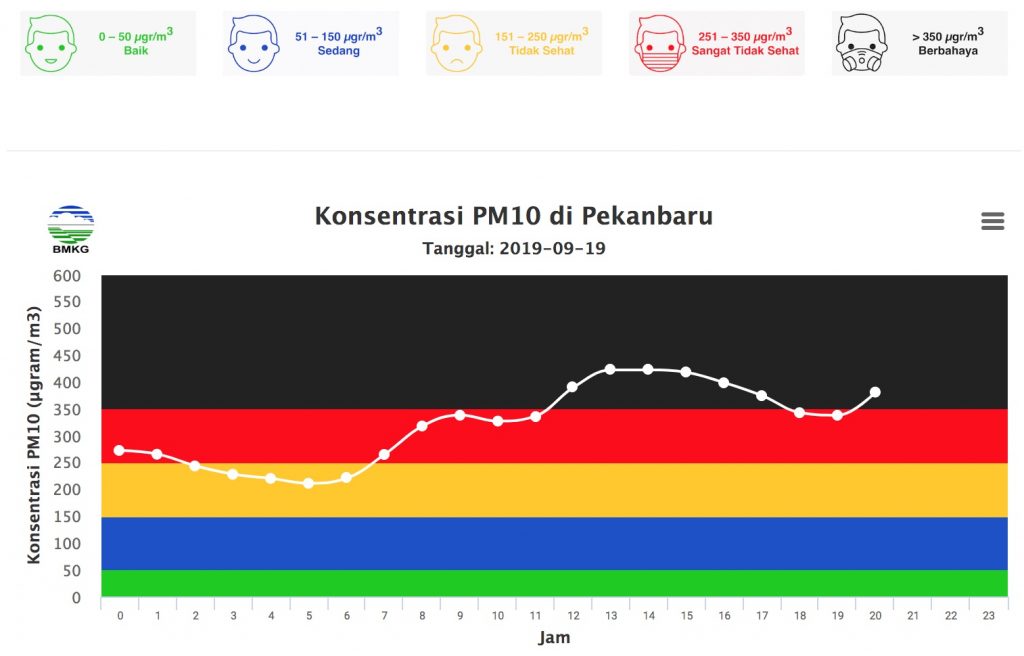 “In just my city, 721 school’s have delayed learning and activities due to the haze situation, impacting more than 190,000 students in Pekanbaru alone. The ultimate and the most saddening impact of the forest fires and the haze is that it now has been taking lives of young children. It has been reported that a baby just three days old has died from respiratory problems yesterday.”

Fires have reportedly spread into Padang-Sugihan Wildlife Reserve, in South Sumatra, one of the last strongholds of the Sumatran elephant. And in Kalimantan, the Borneo Orangutan Survival Foundation said Tuesday that the haze was severely affecting hundreds of great apes in its care, as well as the rescuers, at their rescue centres and wildlife re-introduction shelters. 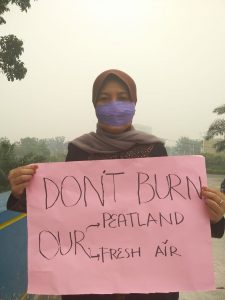 The climate implications are extraordinary. As Mongabay notes, the fires are a disaster for Indonesia’s commitment to curb its carbon emissions. Nearly 3,400 square kilometers (1,300 square miles) of forest have been burned in the first eight months of the year, according to official figures. The burning has resulted in the release of nearly 110 million tons of carbon dioxide equivalent (CO2e) into the atmosphere which is equal to almost half of Indonesia’s annual emissions between 2006 and 2016.

And the fires are affecting international relations with Indonesia’s neighbors. The transboundary haze is once again increasing diplomatic tensions between Jakarta and Kuala Lumpur. Malaysia’s environment minister, Yeo Bee Yin has shared data publicly challenging her Indonesian counterpart, Siti Nurbaya Bakar, on her denial that the haze in Malaysia is coming from Indonesia.

The causes are complex, but among them are links to the past, present and future of pulp and paper.

The Indonesian civil society coalition, Eyes on the Forest, analysed the satellite data from NASA FIRM VIIRS looking for fires in the categories of nominal and high confidence, finding 7205 hotspots occurring in the first week of September in Sumatra.

While the majority of the hotspots (5405) were in non-concessions areas, there are still 1649 hotspot originating from Industrial Timber Plantations concessions (Hutan Tanaman Industri, or HTI, in Bahasa). The pulp and paper industry in Indonesia has extensive tree plantations on drained peatlands. To produce acacia pulpwood or other commodities, water must be drained from the wet peatland soil to a depth of around 70 cm using drainage canals. Drained and dried peat is particularly prone to fire, is hard to extinguish and produces massive amounts of haze as it burns. 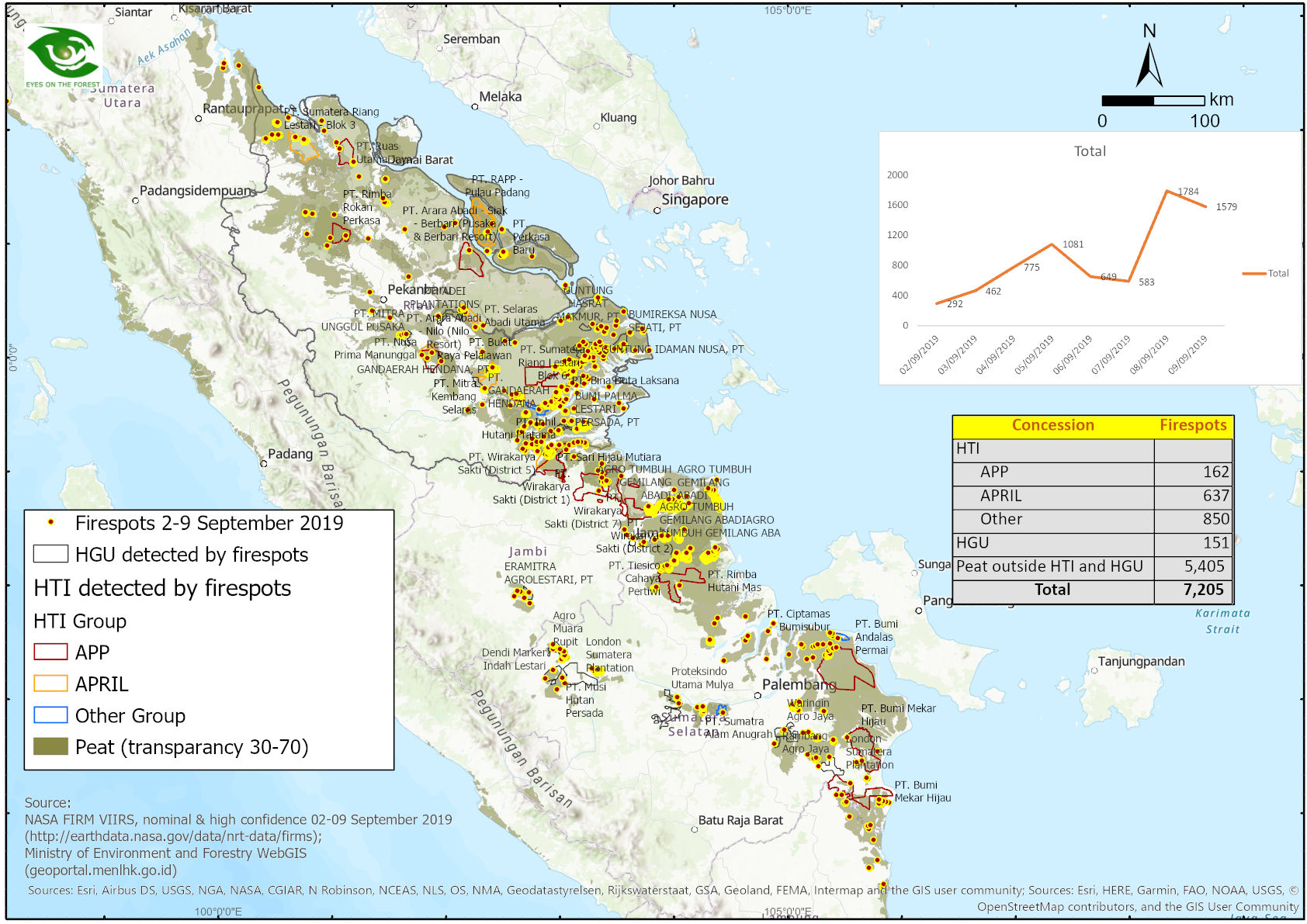 In August, the Ministry of Environment and Forestry said they had put a police line on 19 companies of palm oil plantations and pulp and paper suppliers in five provinces due to fires on their concessions. In Riau, this includes pulp and paper companies PT RAPP (APRIL), PT AA (APP), PT SRL (APRIL), and the palm oil company, PT GSM. Just recently, the number of sealed off companies has been reported at 30. As reported by ABC News, the law enforcement director at Indonesia’s Forestry and Environment Ministry, Sugeng Riyanto, said the plantation companies, including a Singapore-based company and four firms affiliated with Malaysian corporate groups, are under scrutiny and waiting for decisions on possible punishment. Yeo Bee Yin has expressed support for these investigations, and the Malaysian government is considering a law that allows it to take action against Malaysian companies operating overseas that are found guilty of contributing to the haze.

Could pulp and paper companies and the government be doing more to address the legacy of the industry on peatlands, and its contribution to the fire crisis?

After drainage, the peat oxidizes, releasing carbon in the form of CO2 into the atmosphere. Even without fires, the release of CO2 from an acacia plantation on peat has been identified by a scientific field study as around 80 tonnes per year per hectare. As a result, drained peatland contributes more than half of Indonesia’s GHG emissions, which in addition to above-ground deforestation emissions, puts Indonesia among the world’s highest GHG emitters. 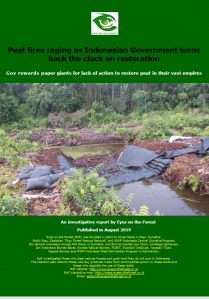 A new investigative report by Eyes on the Forest published in August finds that the government is rewarding paper giants in Indonesia for a lack of action to restore peat in their vast empires. The objective of the monitoring was to evaluate the pulp & paper giants, Asia Pulp & Paper/Sinar Mas Group (APP/SMG) and APRIL/Royal Golden Eagle group (APRIL/RGE), and the MoEF’s own compliance with and progress in implementing Indonesian government regulations on peat protection and restoration.

To create transparency on the issue and evaluate the restoration performance by both HTI concession holders and government in the country’s top peat province of Riau during the past 3 years, Eyes on the Forest surveyed HTI concessions with drones and on the ground between July and December 2018.

The HTI concessions surveyed covered 12% (149,142 ha) of the peatlands mapped as Protection Function Peat Ecosystems (FLEG) by the Ministry of Environment and Forestry (MoEF) inside concessions affiliated with APP/SMG and APRIL/RGE. The concessions surveyed also covered 6% (167,810 ha) of all FLEG areas in Riau Province, which has the largest area of FLEG in the country.

In summary, Eyes on the Forest found:

• Poor efforts made by APP/SMG and APRIL/RGE affiliates to restore peatlands zoned for protection by the Ministry of Environment and Forestry and/or Peat Restoration Agency in some of the concessions investigated.

• Alleged violation of Minister of Environment and Forestry Regulation P16/2017 by all four APP/SMG and APRIL/RGE affiliated companies in all except one HTI concessions investigated by way of replanting acacia after harvesting the old plantation instead of restoring the peatlands with native species as required.

• Apparent lack of government supervision of these companies for non-compliance with government regulations.

• Lack of restoration efforts by the Ministry of Environment and Forestry in one concession for which the Ministry had revoked a license in 2016.

The impacts of forest and land burning on the climate, public health, endangered wildlife, and livelihoods of forest communities in Indonesia is a global tragedy. And fires exacerbated by what has already been a dry year are expected to worsen during the peak of the dry season in October. It is clear that much more must be done by government and the pulp and paper industry, and palm oil industry as well, to restore and protect tropical peatland and to stop burning on the land concessions of companies.