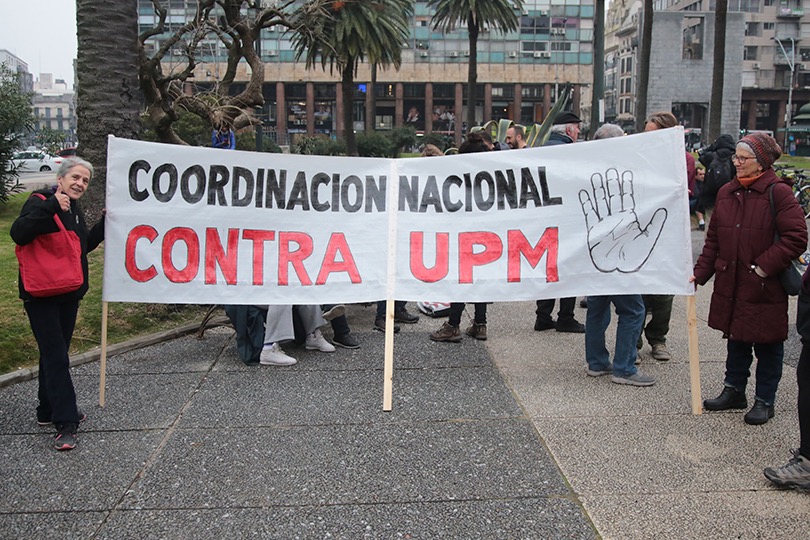 In Uruguay, the citizen opposition to a new pulp mill planned by the Finnish paper giant UPM continues to grow. Last Friday, a citizen movement calling itself as the “national coordination of social organisations against UPM”, representing more than 40 organisations and campaigning under #UPM2NO, went to the Consulate of Finland in Uruguay. They handed in a letter to the government of Finland where they expressed their firm opposition to the construction of UPM’s new pulp mill on the banks of the Río Negro.

The letter states: “this project agreed upon between UPM and the executive branch [of the Uruguayan government] – in an arbitrary and unconstitutional manner – constitutes a serious attack on sovereignty, the environment and human rights in this country.” The letter further elaborates the various negative social, environmental and economic impacts of pulp mill and refers also to the negative institutional and legal consequences of this ‘agreement’.

Some of the main worries of the organisations are that the agreement includes “an unacceptable intervention of UPM in the labor legislation and in the education programs of the country” and “eviction of family farmers from their land and loss of jobs in agriculture.”

The goal of personally delivering the letter to the Consul of Finland was to let the Finnish government know that in Uruguay there is a growing opposition to the UPM project. “As inhabitants of this territory, we consider our legitimate rights and interests seriously affected and we will appeal to all possible instances so that UPM2 is not carried out. For this reason, we make this call to the Finnish government and the UPM company to cease “and desist from this mega project.”

The letter concludes stating: “We will demand accountability from the executive branch of our country and we hope that you will convey the opposition of a growing part of the citizenship to your government.”

Please find the original letter here, an English translation of the letter here, and a video of the march here. The planned new pulp mill in Paso de los Toros is also included on the list of Dodgy Deals that are projects or companies financed by private sector banks that have been identified as damaging to the environment or society and shouldn’t have a place in the portfolio of responsibly operating banks.