Asia Pulp and Paper admits links to controversial suppliers, but still fails to be transparent

A coalition of Indonesian and international NGOs released a report today bringing to light that Asia Pulp and Paper (APP) has acknowledged links to controversial suppliers but continues to fail to be transparent. The Indonesian paper giant recently released a document  (APP Assessment on its Links with Industrial Forest Plantations in Indonesia) aimed to dispel all doubts about its corporate structure. The briefing released today by a coalition that includes WWF, Hutan Kita Institute, Rainforest Action Network, Auriga and others, provides an analyses and seven takeaways from the report by APP on its links to pulpwood suppliers in Indonesia.

APP is a notorious company, responsible for two decades of environmental and social conflicts, after deforesting around two million hectares of tropical rainforests and affecting hundreds of villages. After the cancellation of more than 100 business contracts over these concerns, APP issued a new policy promising to stop deforestation, respect local communities’ rights and assure transparency.

Transparency is the key element to make sure that deforestation will actually stop following such a policy announcement, and that community rights are respected. This is particularly true about APP, which is part of the Sinar Mas conglomerate, controlled by the Widjaja family, and is an extremely complex and obscure network of ownerships, including many forestry companies. It is a system that led the journalist Joe Studwell, in his book Asian Godfathers, to say that the Widjajas are masters of the ‘godfather arts’; they pyramid companies and practice opaque interplay between private and public businesses. (Asian Godfathers, Grove Press, 2008).

NGOs and buyers hopeful that the new era of attention on environmental and social responsibility would bring full transparency have been disappointed.

In May 2018, an NGO study, Removing the Corporate Mask, raised the alarm that APP suppliers described by the company as “independent” are actually controlled by the company though a complex network of offshore holding and trust companies.

APP has been exposed by Greenpeace for still being involved in deforestation as companies connected with APP/Sinar Mas have cleared almost 8,000 hectares of forest and peatland. In August, 2018, an NGO coalition exposed APP for sourcing by plantation companies involved in deforestation. They documented that PT Sarana Bina Semesta Alam (SBSA), a wood chip mill in East Kalimantan affiliated with APP, was also receiving rainforest wood from a land-clearing operation from another supplier, PT Silva Rimba Lestari. At the time, APP denied that it owns or controls PT Sarana Bina Semesta Alam.

Furthermore, an investigation by the Associated Press published in December 2017 found that another company, called MSL, a forest plantation with links to APP, had cleared rainforest and destroyed peatlands in Kalimantan since 2014.

To respond to these claims, APP announced it would submit to a third-party audit on its corporate structure. However, what APP released is a mere summary produced in-house by the company itself, from a report done by an accounting company that has not even been mentioned. This has caused civil society to challenge the claims of transparency by APP. In its new ‘summary’, APP acknowledges it has “significant influence” over its “partner” wood chip mill SBSA, and that the company purchased wood from PT Silva Rimba Lestari, the supplier accused to destroy natural rainforest in East Kalimantan, but claims that the wood was used only for “infrastructure purposes,” a poor justification if it is the case. This shows that a failure in disclosing its corporate structure is incompatible with APP’s commitments towards forest protection.

It also acknowledges that “three of MSL’s shareholders had relationships with APP,” but declines its responsibility, claiming that “two were ex-employees of APP who left in October 2015 and November 2015 and one was a current employee who had not declared his shareholdings and position within MSL,” and was subsequently terminated. However, a Mongabay investigation, published in July 2018, cast doubt that these APP employees were managing plantations company on their own:  “Two of APP’s ex- employees interviewed by Mongabay said management had used their names on official filings for the company [. . .] One said that he had received a monthly payment to compensate for the arrangement, and that he had been afraid to protest for fear of losing his job.”

Basically, the APP ’summary’ admits what cannot be hidden anymore, but still refused to recognise and to fix the house of cards of “independent” formally companies controlled by its employees. This kind of structure, besides violating the Indonesian legislation (Presidential Regulation 13/2018), makes it impossible to verify the credibility of APP’s own commitments.

For help in identifying subsidiaries and affiliated companies in the Sinar Mas conglomerate, the Environmental Paper Network developed the searchable Indonesia Forest Products Database. In fact, APP itself doesn’t exist as legal entity, it is a “commercial brand” for a number of company controlled by the Widjaja family. Worth noting, is that APP’s summary report is even missing PT Purinusa Ekaparsada, the company that owns the APP brands.

Consolidated shareholder, commissioner, and director map for 24 of APP’s “independent” supplier companies and holding companies, as of April 16, 2018. 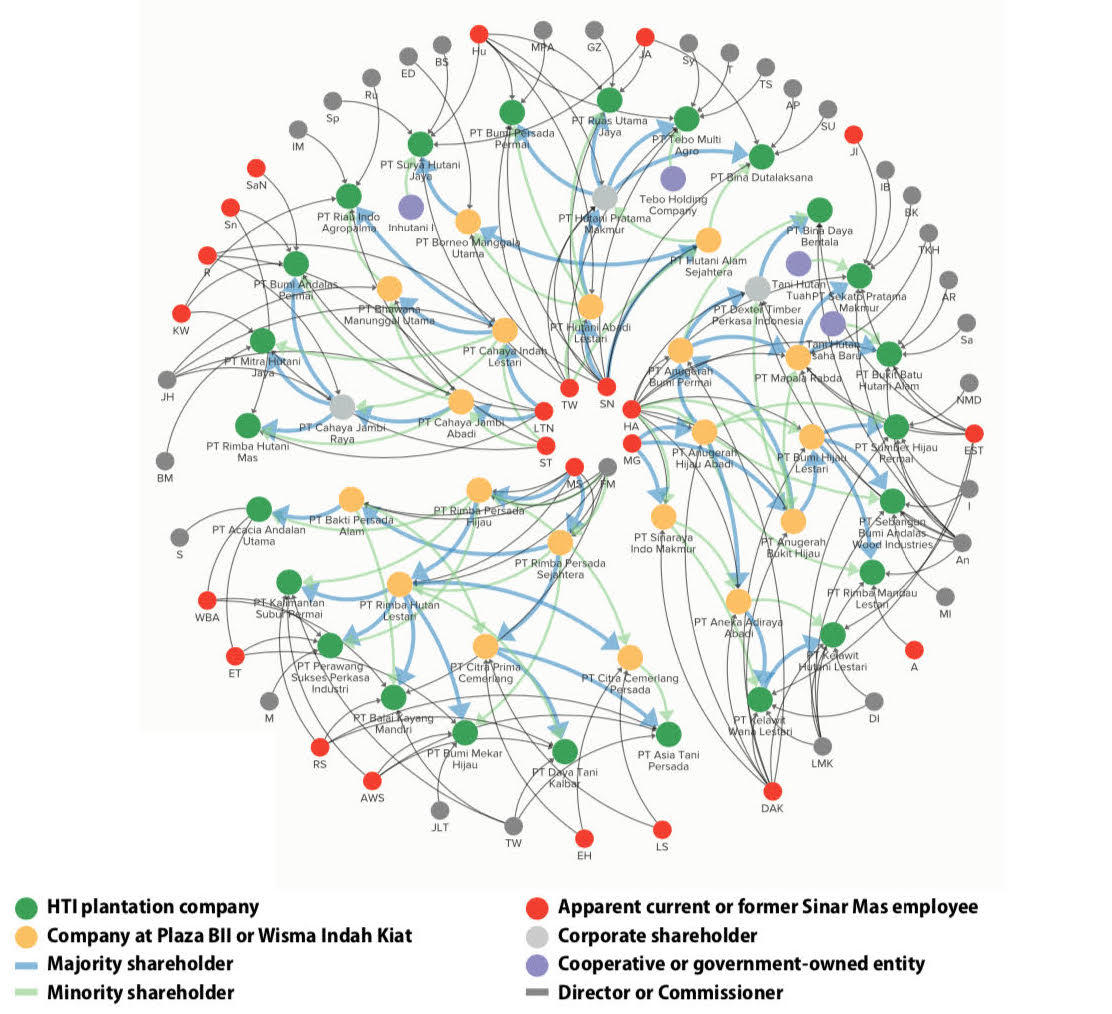