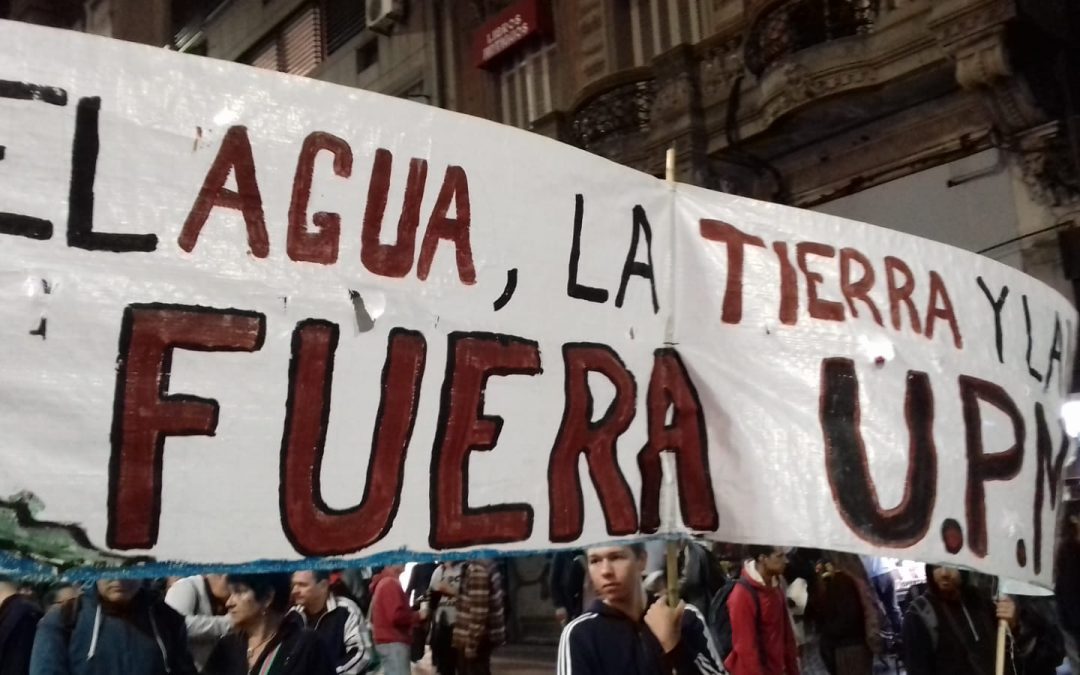 Uruguayan and Finnish social and environmental organisations released a joint statement last week stating their opposition to the plans of the Finnish pulp and paper company UPM to build a new pulp mill in Uruguay (UPM also has an existing mill in Fray Bentos). This new mill would have a capacity of around 2 million tonnes a year and would be located in Paso de los Toro, on the Negro river. With an estimated cost of around 2 billion euros, it would represent the largest private investment ever in Uruguay.

To attract this investment, the government of Uruguay has signed a contract with UPM in 2017, in which it commits, among other things, to create a tax free zone for the UPM mill, to invest in the renovation of a railway and of roads, to build a new port, to raise the water level of a nearby reservoir to ensure the Negro river will always have enough water for the mill to operate, it will change zoning plans and work on changes in labour laws, speed up licensing processes, guarantees it will buy UPM’s electricity and it will give UPM influence on the curriculum of a new technical course to be created at the Technological University. In 2020, UPM will evaluate the progress Uruguay has made with these commitments, and will only then decide if it will proceed with the construction of the mill. Lawyers have argued that the contract, which will cost Uruguay an estimated 4 billion dollars in taxpayers money, is unconstitutional as it was not approved by parliament.

Joint Statement of Uruguayan and Finish social movements against UPM’s plans to build a new pulp mill in Uruguay (March 20, 2019)

This international cooperation of social movements shares a common interest in protecting our environment and human rights including the right to dignified employment and housing. Our aim is to protect the quality of life in our communities’ land, water, and people.

UPM is planning to install in Uruguay its second pulp mills, one the largest in the world producing about 2,1 million tons/year. The project includes: a new railway, an upgrade of highways, forestry plantations, changes to the main port of the country, a new high voltage line to connect to the national electricity grid, and several processing plants within a duty-free zone.

We are looking to promote awareness, share information and call for a stoppage of this project because of its economic, social and environmental effects.

Most of the components of the UPM new pulp mill will cost the Uruguayan people an estimated of U$S 4 billion; as it was committed in the agreement signed by Uruguayan Executive branch and UPM. The company states it will not invest more than U$S 2.4 billion. In addition, UPM will be exempted of paying most taxes as it will be installed in a free zone.

The social impacts include loss of jobs in the various sectors such as: family farming, agriculture, and beekeeping for changes in the uses of land into monoculture tree plantations, in tourism for the contamination of water and land, in artisanal fishing and industry, among others. There are also social impacts in everyday life such the increase in rent prices, the lack of adequate social services, the increase in sexual exploitation and violence specially against women.

In addition, the freight train for cellulose and chemical products will cross towns and urban areas including the capital of the country covering ​​more than 270 kilometers with high impacts and risks for the inhabitants of the place, besides producing losses for small businesses next to the train tracks.

The environmental effects are the most important since the waterways surrounding the plant are already highly contaminated. The contribution of effluents like phosphorus from the new UPM plant will worsen the situation exponentially. We already have serious problems maintaining the water quality, as demonstrated by the huge increase of cyanobacteria on Uruguayan coasts this Summer.

We call to desist from participating in a project with negative economic, social and environmental impacts.

Friends of the Landless, Finland