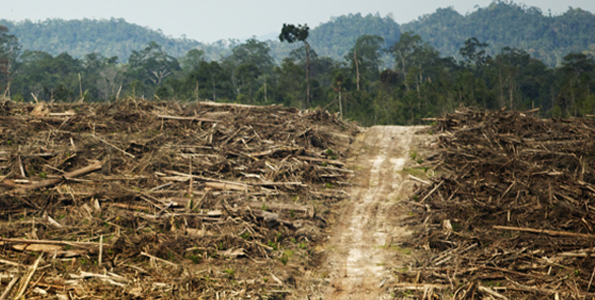 The Government Regulation (PP) 57 of 2016 on the Protection and Management of Peat Ecosystems regulates peatland management, identifies peatland that need to be protected and other peat areas still suitable fo productive functions.  In Riau, the majority of the industrial pulpwood plantations (also called HTI) areas are located n peatlands of high hydrological value, that require the protection status. This is especially the case  for the plantation licenses located alongside the coast and in the small peat islands, where the peat often more than three meters deep.

“A clear case is the Pulau Padang Island. – continues Isnadi -Since the first settlements, in 1916, and local people used the forests and peatlands in a sustainable way, by planting sago with an agroforestry approach, without major peat drainage and draining canals.The Malay people, mostly settled on the coast, and the Javanese people settled in the inland, living in harmony, and exchanging they respective products. The peatlands were a bridge of social interaction and cooperation. Disputes were settled within the traditional tribal or religious structures.”

“Local communities used many product from the forest, and planted rubber trees and coconut around their villages, and had enough to live and to pay for children education and for community activities, while sago, planted along the rivers as intercropping plants in the forest, provided the basic food.
In 2009, APRIL subsidiary PT. Riau Andalan Pulp and Paper (RAPP) obtained an operational permit for wood forest product, then emended in 2013.  The arrival of the plantation company disrupted the local community livelihood: now, 90% of the community coconut plantations in Padang Island is being attacked by beetle pest coming from the concession area of ​​PT. RAPP. The same pest is affecting sago plants too. Peat erosion caused by the company also affected rubber plantations, that are no longer productive. ”

PT. RAPP keeps draining the peat with canals in order to plant acacia, leading to massive erosion. A research done by JMGR together with one University in Riau found that in the depth of peat of Pulau Padang assessed subsidence to 9-10 cm / year. This mean the the intere island of Pulau Padang, its ecosystems and its communities may disappear

The government regulations on peat protection and management should apply to PT. RAPP, and lead to immediate revocation of its permits, especially considering the virulent social conflicts ignited by the company, its arrogance  when facing the Head of the Peat Restoration Agency (BRG) last year, and the results of Lidar mapping and the study by the Ministry of Environment and Forestry (KLHK) proving that its concessions are prevalently situated in deep peat.

“The political election are approaching, do not let environmental issues and conflicts be used as bargain tools for political or financial support. The licensing system the region is the dark heritage of the past regime and it should not be endorsed by the new governments, keeping to destroy peat and threatening the life of local communities. The administration of President Jokowi must be firm and brave in facing the forestry sector permits that have a negative impact on the environment and peatland life” concluded Isnadi.

How do we keep saving paper as our operations find the “new normal”? Join this webinar featuring lessons from work @Root_Solutions and @AASHENews did with dozens of campuses. Register for the webinar at http://bit.ly/paperchange
Webinar hosts: @Root_Solutions and @WhatsNYourPapr