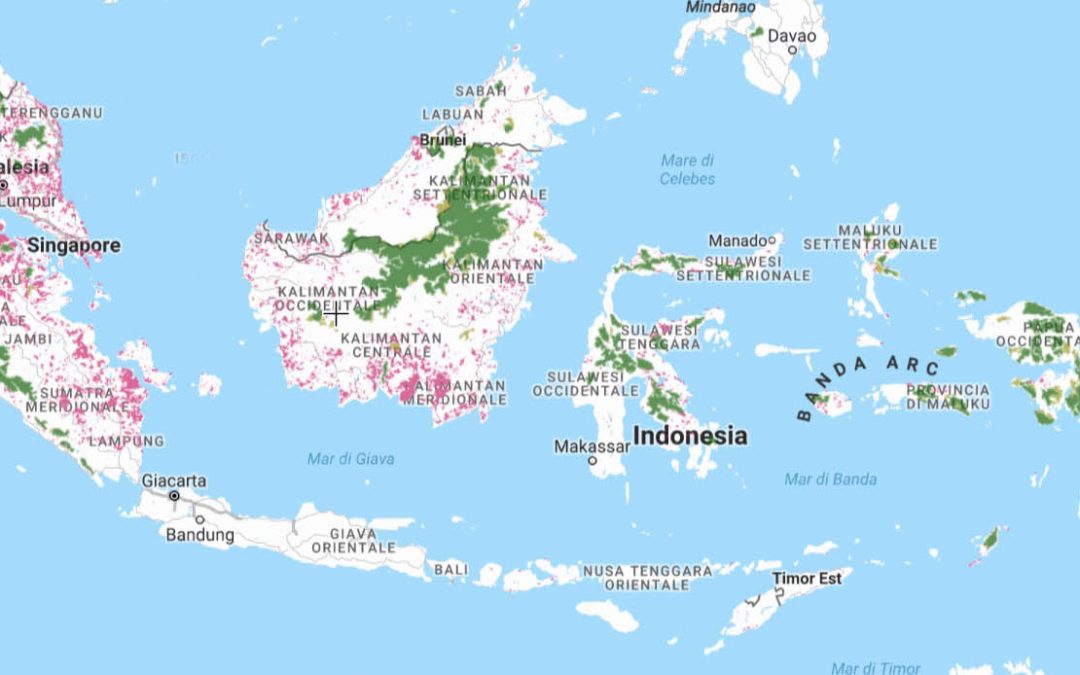 Palm oil and paper lobby groups have asked Indonesia’s highest court to strike down rules holding plantation firms strictly liable for fires that occur on their land, according an article pubblished on Mongabay. The groups have also asked the Constitutional Court to eliminate a regulation letting small farmers practice slash-and-burn techniques, the cheapest land-clearing method and a mainstay of indigenous cultures in the Muslim-majority archipelago nation.

The judicial review, filed last month by the Indonesian Palm Oil Association (GAPKI) and the Indonesian Association of Forestry Concessionaires (APHI), has prompted a backlash from critics who say it threatens the environment and indigenous peoples’ rights.

It comes amid a larger debate over who bears responsibility for the devastating fires that burn annually across Indonesia’s vast peat swamp zones, which have been widely drained and dried by oil palm and timber growers — and rendered highly flammable. The great fires of 2015 burned an area the size of Vermont, blanketed Southeast Asia in haze and sickened half a million people.

Companies like Asia Pulp & Paper — which saw more than a third of its land in South Sumatra burn in 2015 — often blame local communities for the fires which they claim spread in from outside or were started by trespassers in the huge, difficult-to-manage concessions. Critics point to the fact that Indonesia’s peatland drainage, the underlying cause of the fires, is largely the work of big corporations.

GAPKI and APHI are targeting three articles in the 2009 Environmental Law and one in the 1999 Forestry Law.

Some of the articles require firms to prevent and fight fires in their concessions. They have been used to sue and press charges against companies for such fires regardless of whether their negligence can be shown to have caused the burning, with such evidence difficult to produce. Judges’ interpretations of the rules have varied.

“Our plea is that our clients should be responsible only for their negligence, otherwise they must not be held accountable,” Refly Harun, who represents the associations, said in Jakarta on May 29.

The Ministry of Environment and Forestry is working with the House of Representatives to prepare a defense against the lawsuit. The minister, Siti Nurbaya Bakar, described it as a setback in the government’s efforts to protect nature.

The article stipulating “strict liability,” she argued, was in line with an article in the Constitution on environment protection and sustainability.

Indonesian law bans the use of fire to clear land for all except the smallest farmers. The Indigenous Peoples Alliance of the Archipelago (AMAN) says communities have practiced such techniques responsibly for centuries.

“Banning traditional land clearing poses a very dangerous threat to indigenous peoples whose lives depend on agriculture,” Rukka Sombolinggi, AMAN’s secretary general, said in an interview. She characterized the lawsuit as an attempt to scapegoat indigenous groups for problems they didn’t cause.

In some cases, the exception is abused. A report by the Center for International Forestry Research, a thinktank headquartered outside Jakarta, described how local elites organize farmers to burn land for sale to a variety of large and small buyers.

The lawsuit might not represent all members of the associations, but only some currently under legal scrutiny in wildfire cases, said Henri Subagyo, executive director of the Indonesian Center for Environmental Law (ICEL).

“If these troubled companies are looking for fairness, then they should come out and present their case so that it’s clear what is what,” he said. “But don’t hide behind the associations.”

He called strict liability the soul of the 2009 Environment Law. “If the Constitutional Court grants the judicial review, it will instead violate our constitution which stipulates environmental protection and sustainability.”

AMAN, ICEL and the Indonesian Forum for the Environment (WALHI) will submit an advisory letter to defend the contested regulations to the court on Thursday morning, according to WALHI Executive Director Nur Hidayati.

“Our move is to involve ourselves in the legal process as parties that are directly affected by the regulations, and this is our right that’s stipulated in the Constitutional Court Law,” she told reporters in Jakarta this week.

“We want to present our facts before the judges and clear up any misunderstanding of the regulations, but ultimately, our goal is for the court to reject the judicial review.”

Inda Fatinaware, executive director of Sawit Watch, which monitors the palm oil industry, called on the court to continue to uphold its commitment to protect the environment and society instead of siding with corporate interests.

The judges have ordered the plaintiffs to revise their original submission as it failed to clearly define their legal standing and conclude how the contested regulations cost them their constitutional rights.

The associations are expected to submit the revision by 10am on Friday, after which the court will decide on a date for the first hearing.