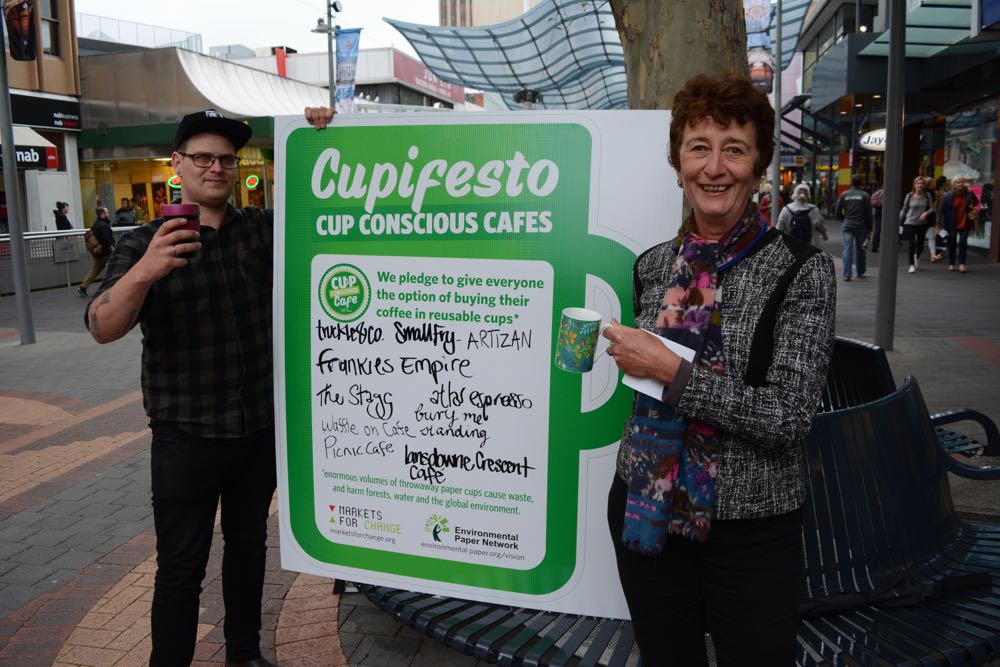 In Tasmania, Australia, Markets for Change is gathering support for a world without throwaway cups, through an exciting movement for ‘Cup Conscious Cafes’. These are cafes who guarantee that customers will always be welcome to bring their own reusable cup for a takeaway coffee or tea.

Markets for Change launched their campaign as part of EPN’s international day of action to launch our Cupifesto at the end of September. Peg Putt, director of Markets for Change, said, ‘We all love grabbing a coffee from our local cafe in the mornings, but did you know that most disposable coffee cups aren’t recyclable or biodegradable? In fact, the cost on our planet of our coffee cups is astronomical! That’s why we are getting local Hobart cafes to sign on as cup conscious cafés.’

Dozens of cafés in Hobart have already signed up as ‘Cup Conscious Cafés’, and are proudly displaying stickers to indicate their support for the campaign.

Now Markets for Change is seeking ‘Cup Conscious Champions’ to volunteer to help spread the movement around Australia. It won’t be long before there are ‘Cup Conscious Communities’ where all the cafés will have signed up.

It is estimated that 58 billion paper cups are thrown away globally each year. That’s one million tonnes of paper, or 32 million trees and 100 billion litres of water, emitting as much greenhouse gas as half a million cars. It’s a mountain of waste that has serious environmental consequences.

The aim of Markets for Change’s campaign is to encourage people to use their own reusable cups as a way of minimising the mountains of waste, deforestation, pollution and CO2 emissions which come from our widespread use of throwaway coffee cups. The idea is to reward cafés who help their customers to take the simple action of drinking from the same cup more than once.

Check out the list of cup conscious cafes in Hobart here: http://www.marketsforchange.org/cupifesto and keep watching while this movement grows and grows!

Markets for Change is one of EPN’s Australian member organisations. Based in Tasmania, it is a group of campaigners who have taken the fight to protect Australian and other forests directly to the companies that drive and profit from their destruction. Market-focused campaigning is an exciting alternative to traditional campaign efforts to produce policy change, which is becoming increasingly relevant as politicians are elected who are uninterested in or even hostile to environmental and human rights issues.

The latest The What's In Your Paper Buzz! https://paper.li/WhatsNYourPapr/buzz?edition_id=82ee7de0-2feb-11eb-96dc-002590a5ba2d Thanks to @GJEP123 @WoodBIOMASS @standearth #forests #climate