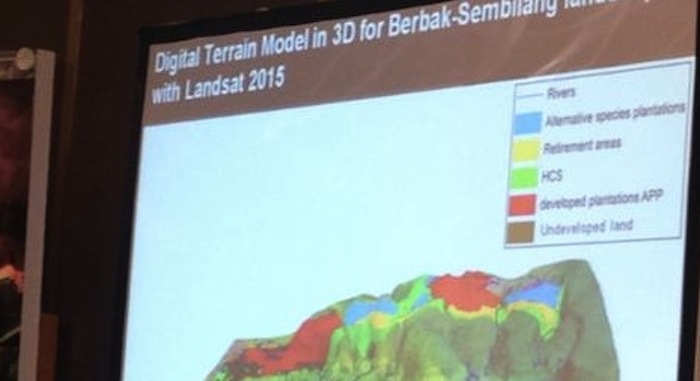 The announcement is part of commitments in APP’s 2013 Forest Conservation Policy (FCP). The Environmental Paper Network has been monitoring and providing support for international NGO engagement in verification and improvement of the implementation of the FCP.  As a part of its FCP, APP committed to a series of new measures on peatland management in support of the goverment’s target for reducing greenhouse gas emissions. In February of 2015 an independent evaluation by Rainforest Alliance determined “moderate progress” overall on the FCP, and highlighted areas including peatland management, illegal logging and social/community rights issues as being insufficiently addressed.

The international conservation community welcomed the announcement from APP as an important step, noting a high-tech mapping initiative featuring LiDAR technology to build an accurate picture of the major peat domes that need protecting, and was also realistic about the scale of work still to be done by APP on peatlands and other issues. Some statements from EPN member organisations are below.

WETLANDS INTERNATIONAL
“Wetlands International welcomes APP’s acknowledgement of the impacts of its plantations on peat and its efforts to improve the sustainability of its peatland management. We recognize that retirement of active productive plantations gives an important signal. Nevertheless, APP’s announcement that it will retire 7.000 hectares from production, divided over 5 different concessions, is just a tiny dot in a vast landscape

Marcel Silvius, Wetlands International’s Programme Head on Climate-smart land-use, said: ”We welcome APP’s statement that the retirement of 7000 ha is just a first step in a long process. However, this is only a small step to address an enormous problem. Their hundreds of thousands of hectares of plantations on peat are not only causing major emissions, but are also continuously subsiding towards levels where flooding becomes inevitable. It is urgent for APP to take action over entire peatland landscapes to stop greenhouse gas emissions and prevent major flooding disasters.”

Wetlands International therefore calls upon APP to develop a plan for phasing-out drainage-based plantations from all its peatlands, including plans for rewetting and rehabilitation, and for truly sustainable management.”  Click here to read full statement and recommendations.

Further, Greenpeace commends both APP and Deltares for their groundbreaking and unprecedented initiative to create new high-tech maps of the peatland landscapes, where APP suppliers are located. Covering some 5 million hectares – nearly 25% of Indonesia’s peatlands, an area larger than The Netherlands – the mapping initiative features LiDAR technology to build an accurate picture of the major peat domes that need protecting. This constitutes the most comprehensive and credible data on peatlands ever obtained in Indonesia.

The resulting analysis will provide the foundation Deltares needs to make additional recommendations to APP on how to reduce or reverse the identified impacts of its existing plantations on neighbouring peat swamp forests, as well as greenhouse gas emissions.

Bustar Maitar of Greenpeace Indonesia said, “Today’s announcement by APP is a potential game changer for the future of Indonesia’s peatland landscapes and tangible action to tackle climate change. Its announcement that it is taking immediate action to retire a number of existing commercial plantation areas and restore them to peat swamp forests sets an important benchmark. Greenpeace calls on other plantation companies to take similar urgent action and work together to ensure all Indonesia’s peatland landscapes are properly monitored and protected.”  Click here to read the full statement.

RAINFOREST ACTION NETWORK
From an article in Responding to Climate Change:  “Lafcadio Cortesi, Asia Director at the Rainforest Action Network, was more muted in his praise for the company. He noted the small scale of the peat restoration projects and slow progress of forest protection measures on the ground.

‘Although this is an encouraging step, it by no means shows that APP has transformed,” he told RTCC. “This announcement can’t be divorced from the company’s performance on the broader set of promises they have made. The Rainforest Alliance audit found that, while APP had stopped cutting down natural forest itself, it had not resolved hundreds of social conflicts or halted illegal logging by third parties.'”

WWF
WWF-Indonesia welcomes APP’s retirement of 7,000 ha of acacia plantation in five areas in Riau, Jambi and South Sumatra provinces. Given that APP suppliers currently operate approximately 1,4 million hectare of concessions on peat in Sumatra and Kalimantan, the retirement of 0.5% is clearly only a very small step for a very big company.

The company has committed to restore and protect 1 million hectares, respectively of natural ecosystems in the general landscapes of their operations, in addition to government mandated conservation set-asides inside their concessions. These 7,000 ha are a first specific case of how APP will reach its 1 million ha target. WWF hopes many more hectares to follow soon and APP to succeed in the actual restoration.

To read the full statement from WWF, click here.

—-
A live recording of the event can be found on the APP website.