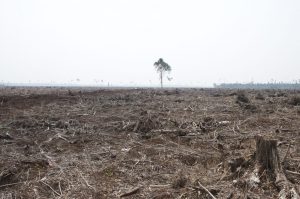 According to the web site Foresthints.news, the Environment and Forestry minister Siti Nurbaya decided to declare invalid the forest permits of PT. RAPP,  the biggest subsidiary and plantation company of APRIL.
The reason is that the company failed to review its 10-year work plan, and its 2017 annual work plan to comply with the new peat regulations, despite a number of letters and warnings from the Indonesian authorities. Consequently, the company lost the legal basis for its forest operational activities.

For instance, the APRIL company’s legal documents state that 70% of its concession in the Pelalawan estate – the estate in the Kampar Peninsula landscape inspected by the Ministry’s Law Enforcement Director General – consists of deep peat which usually constitutes peat domes.

However, a LiDAR mapping-based analysis conducted by Deltares (2015) revealed that almost all of APRIL concessions in the Kampar Peninsula landscape, including Pelalawan estate, are comprised of deep peat.

According to the same source, the Ministry found APP companies in compliance with the regulations and had their work plans approved. In the past moths the ministry sent o number of warnings to APP too, but apparently an agreement has been found.

Environmental Paper Network is a coalition of over 150 NGOs working together for environmental and social responsibility in the forest, pulp & paper industries.